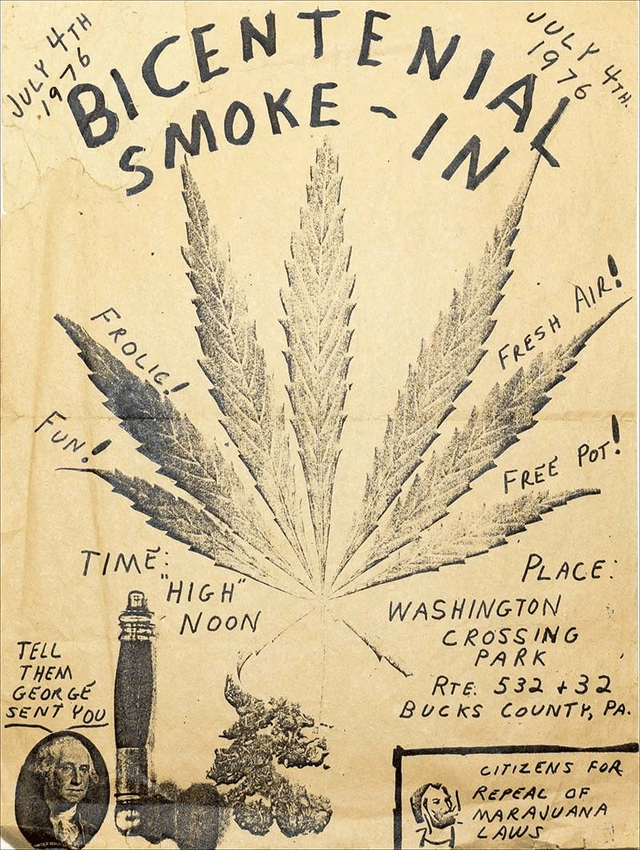 In recognition of the Fourth of July, it seems a good time to recall the cannabis protests of the 1970s called “Smoke-Ins” that organized thousands to protest for reform.

It is also good to note how long people have been fighting for cannabis reform.

Ken Wolski, the Executive Director of the Coalition of Medical Marijuana New Jersey (CMMNJ) was there in 1973.

“Thousands turned out. Helicopters had just started circling the crowd and the rumor quickly spread that they were police helicopters and they were taking photos of the crowd. Almost as one, the crowd rose and gave the finger to the helicopters,” Wolski recalled.

A newspaper clipping from the Trenton Evening Times dated July 5, 1973, provided by Wolski, said the helicopters were there for “traffic control”. It also said that the cannabis protest was arrest-free. In addition, many joints were passed around. Organizers said they sought to give out 500 joints to the cannabis protesters.  The crowd was described as hippies.

The cannabis protest was a great gathering of activists and enthusiasts.

“I remember beginning there,” recalled, cannabis advocate and professional Diane Nickerson. “We didn’t do things like that around there. “It was so awesome.”

Nickerson said. She recalled many smoking in a festive atmosphere. But it was not merely a party. Nickerson said many activists were passing along pamphlets against the Vietnam War and calling for the impeachment of then-President Richard Nixon.

“We were there to free the plant, free the prisoners, stop the war,” Nickerson said.

Along with being for cannabis reform and against the war, many there were fighting racist laws. Nickerson recalled the cannabis protest as a diverse gathering of many people.

“It was just beautiful,” she said.

According to Wolski’s article, the cannabis protest was organized by Bucks County Pot People Party, the Yippie Nation, and Rainbow People.

The Yippies were a political activist group of that era most famous for that their protests against anti-Vietnam War in Washington, DC and the 1968 Democratic National Convention in Chicago. They were also adamantly in favor of cannabis reform and added a cannabis leaf to their flag.

An old poster said the 1976 protest was organized by “Citizens for the Repeal of Marijuana Laws.”

Nickerson said recalled that Yippie leader Abbie Hoffman spoke at the cannabis protest. According to her, the Yippies had to sneak Hoffman in since he was evading the cops due to a drug charge.

At one point a helicopter came down to the field where the protesters were gathered.

“It had the biggest joint I ever saw in my life. They dropped and it split open and there were a bunch of joints in there,” Nickerson said. As per the name, organizers were encouraging people to smoke.

On a Reddit thread about the cannabis protest poster, a commenter said “My friends and I walked 4 miles. I got blisters ‘cuz I was wearing new cowboy boots. The cops just watched us walk by, smoking joints. I guess the local government told them to stand down. Lots of people from 18 (the organizers discouraged underage kids from participating) to mid-30s. The speakers, including one from NORML, talked about all the research and legislative actions being taken. We were sure we were just about to turn the corner on making it legal.”

If only that were true.

In the 1970’s following the establishment of the National Organization for the Reform of Marijuana Laws (NORML), some cities and states began decriminalizing cannabis. More on that can be found in Cannabis 101.

The organizers chose the spot for the cannabis protest well.

Washington’s Crossing is the spot where the Continental Army led by George Washington crossed the Delaware River from Pennsylvania to New Jersey depicted here.

The army crossed the river Christmas Eve in 1776 and proceeded to march to Trenton, NJ where they surprised the British Army and their Hessian mercenaries in the Battle of Trenton. The British who had been drinking were caught unaware. It was a great victory for the Continental Army which had suffered a string of defeats that year following the Declaration of Independence. Had the battle been lost, it is quite probable the American Revolution would have been lost.