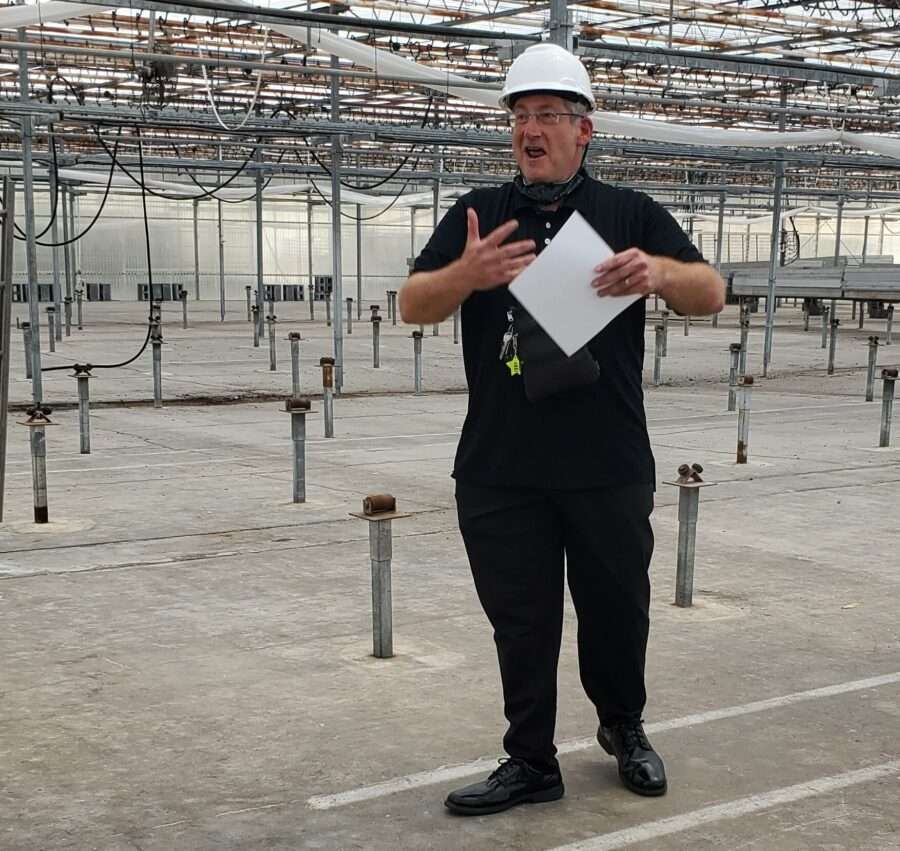 On Saturday, Green Cell led a tour of a hemp farm in North Jersey showcasing the nuts and bolts of the hemp growing process.

The tour was led by Dan Watkins, CEO of Green Cell on their hemp farm in Lincoln Park, NJ which will utilize massive greenhouses to grow hemp. The plants are grown in pots within the greenhouse. Plants grown in a greenhouse allows farmers to grow more crops during the year.

“Grow things that go to market,” Watkins said, advising against farmers refining their crops before being sold. He added that growing

According to one expert, the hemp farm can possibly harvest 300 pounds to 600 pounds per greenhouse depending on how many plants are placed in a greenhouse and how much light the plants receive.

“I don’t want to offend anyone but inside of a greenhouse, you’re God. What you let in, you let out,” Watkins explained. Conditions in greenhouses are controlled tightly by the growers. For example, large fans make their main greenhouses cooler while a sprinkler system to water the plants was set up overhead.

Green Cell recently purchased the hemp farm with its two-acre greenhouses. The hemp farm has been used to grow orchids most recently. Watkins noted that there are hemp versions of all the well-known strains since they simply would not contain sufficient THC. When lowering THC in a plant, there can be more of the cannabinoid CBG which has become highly valued to the tune of $500 a gram. In contrast, currently, a pound of hemp goes for very cheap.

Along with hemp, Green Cell was planning to grow lemon trees Watkins said because lemon terpenes, which produce the distinct scent, goes well with hemp.

Edward Tobias, a lawyer based in East Brunswick was the first USDA hemp cultivation permit approved in New Jersey history. New Jersey was one of the USDA’s first three approved hemp programs in the country, along with Ohio and Louisana. Tobias was thus one of the first in the nation that obtained a USDA permit. So after being one of the few states that did not enact a Hemp pilot program, New Jersey is now near the front of the line in hemp.

Tobias also applied in the last ATC round for a clinical cannabis (or medical marijuana) dispensary license. He is subsequently suing the NJ Department of Health, disputing the grounds in which it was rejected. Tobias said he is confident he will win.

Tobias had been involved in hemp for a number of years. While growing up, he was friends in Indianapolis with David Rheins who later launched MJBA in Washington State.

“The hemp grown here will be among the first grown fully legal under local, state. and federal laws and transportable throughout the entire country,” Tobias said. On February 3rd, his firm August 10th Investments became the first company to receive a license. Subsequent hemp farmers must also secure permits to grow on a hemp farm.

Other speakers at the event on the hemp farm included Emilio Osario of Quantum Level Leader, Dr. David Cunic, CEO of USC Advisors on helping start-up navigate the waters, and raising capital, Adhu Krishnan, the owner of AK Aveksha, an Ayurveda and hemp healing company, and Art McHenry, CEO of Green Line Hydroponics who discussed the nuances of growing and the supply chain.

Unfortunately, Green Cell has had difficulty planting due to COVID. Thus the greenhouses were empty when they should have been filled. COVID has similarly adversely affected many hemp-related businesses, among others.

Farmers do not make a lot of money when selling hemp per pound to use for biomass versus CBD.

The majority of the crops grown last year by legal hemp farmers had to be destroyed because they were “hot” which means they had more than .3 percent THC. It is a very strict limit. Some state hemp pilot programs allow THC around .4 for example.