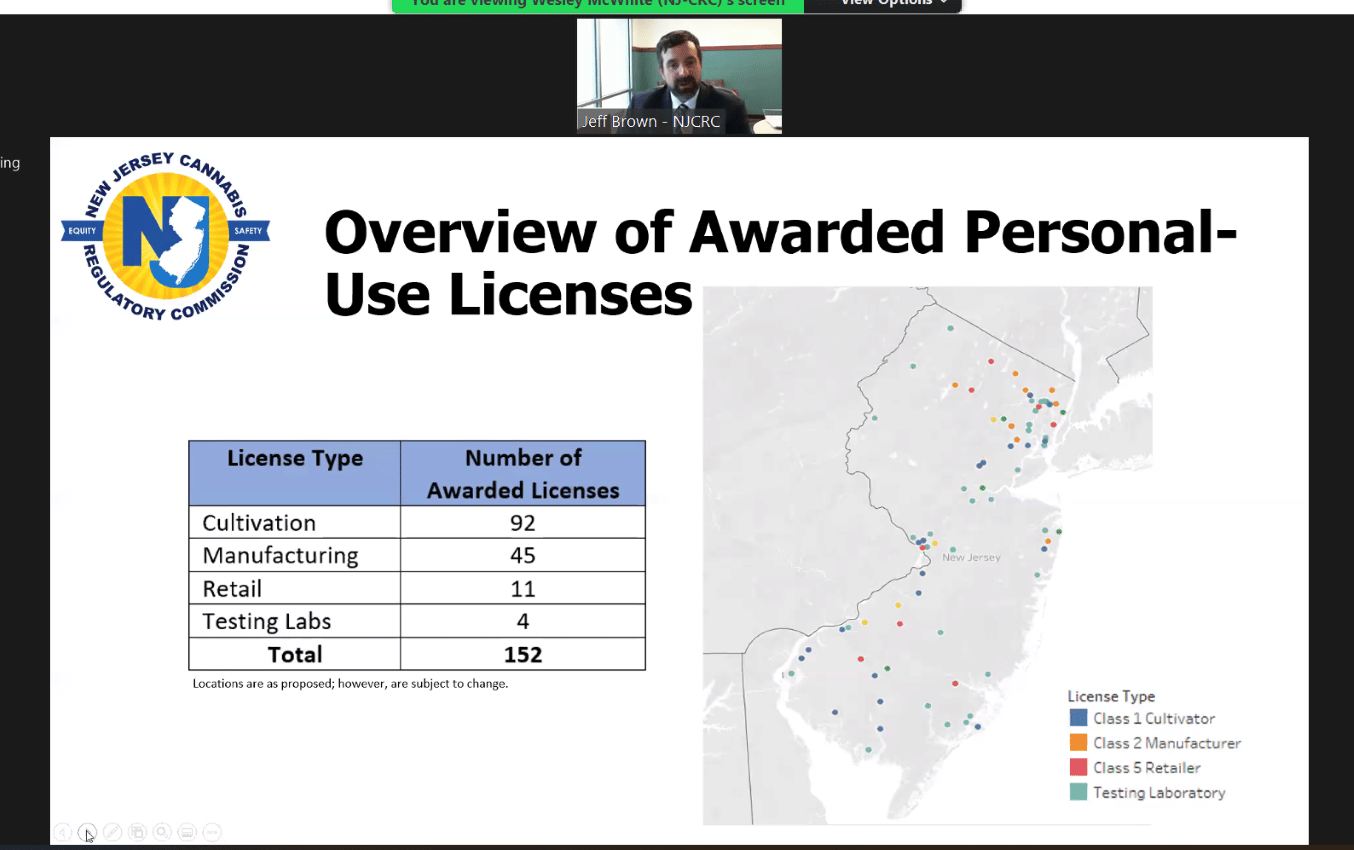 “We have another slate of conditional license applications for recreational,” NJCRC Executive Director Jeff Brown said.

He explained that 46 adult-use licenses were going to be approved, including 11 adult-use cannabis dispensaries.

“We’ve now gotten to our first slate of Class 5 retailers, and it’s just over 60 days… since we began accepting applications,” Brown said.

He took great pride in that, given the onerous nature of several previous delays.

They were approved unanimously.

They were approved 4-1, with NJCRC Commissioner Charles Barker retaking his contrarian position.

“Three of these labs have been operating in medical cannabis,” Brown said.

Further labs are forthcoming, he said.

“Shout out to NJCBA’s (NJ CannaBusiness Association) Testing Committee,” Brown said. “We have faith with all of them.”

He noted their tentative locations would likely change.

“We have received over 1,000 total applications,” Brown said. “Over half of them have received an initial determination and review.”

“Folks should review all the resources on our website before submitting an application,” he added, explaining that many have made errors that delay their applications.

NJCRC chair Diana Houenou noted the opening of the New Jersey adult-use cannabis market “was an important milestone, but it does not market the end of our process. It simply marks a step in a multi-year plan.”

“The CRC has taken intentional steps to set up an inclusive industry,” Houenou said.

She urged banks, landlords, attorneys, and employees to ensure people have a fair opportunity to participate in the industry.

“Working together is the only way to have the industry reflect the diversity of our state,” Houenou said, noting several metrics to measure it.

“It’s certainly a substantial number, but it’s only a beginning,” Brown said. “It has gone as smooth as we could hope.”

He said they are serious about patient access requirements.

“Overall, we’ve seen good compliance, but there have been some hiccups,” he said.

However, they were resolved quickly.

“There’s a tremendous amount of opportunity in this industry for new businesses to enter the market,” Brown said.

“There are three certifications under consideration,” Brown said. He explained they need to ensure they can continue to serve patients, including supply, plans for patient access, address social equity, and safety, and focus on patients and other issues.

Mike Conway of Ascend Wellness explained patients would not have to wait. There will be a patient access number, patient-only hours, will host two town halls for patients, and other things to ensure patient access.

Ascend plans to host two expungement clinics with attorney Chirali Patel, develop relationships with organizations to hire the poor and felons, host more workshops, including how to start a cannabis business, and support Social Equity applicants with funding and mentorship.

Julie Winter of Garden State Dispensary/Ayr Wellness explained they went through extensive planning to ensure medical cannabis service continues. They will begin home delivery starting next week, institute curbside pick-up and dedicated lines, and a phone line they promise someone will pick up.

“We will continue to provide private onsite counseling for patients,” Winter said.

Chantelle Elsner of TerrAscend noted their other locations are open for adult-use cannabis sales and said they want to serve patients too.

TerrAscend’s Lodi location is not yet open.

Elsner said they would provide home delivery now too.

“The CRC expects weekly and monthly reports from every ATC operating in the adult-use market,” Barker said. “We look forward to your continued compliance.”

They were approved unanimously.

“There’s going to be an operational assessment for regulatory compliance,” Brown said. “Then licenses will be issued.”

Rather than wait one year, companies that won medical cannabis licenses last year can quickly comply with the necessary medical cannabis service requirements and qualify to sell both medical and adult-use cannabis. They no longer have to wait 12 months to apply.

“We want to make sure awardees were first and foremost committed to the medical marijuana market,” Brown said. “We’ve seen the market get started. We’ve now rethought some of those requirements.”

“Once you fully implement your businesses, you’re an Alternative Treatment Center for business, and prove you can serve patients, awardees would be eligible to apply for expansion,” he added. “It will incentivize those who can move quickly.”

It was approved unanimously 5-0.

Brown explained some companies want to change their proposed location. He said it’s not uncommon for ATCs to change locations during the permitting process. Vertically integrated licenses have 18 months to launch, while dispensaries have 12 months to be launched.

The following companies wanted to change where they would be based:

Specific locations were not specified.

“Staff has no concerns,” Brown said.

In addition, Columbia Care wants to grow more in Vineland in Cumberland County, and Garden State Dispensary (GSD), owned by the out of state Multi-State Operator (MSO) Ayr Wellness, wants to grow in Lakewood in Ocean County.

Brown said they are permitted to do so. The resolution passed unanimously.

Chief Counsel Christopher Riggs said they are developing with the police training commission to maintain drug-free workplaces. They have been working with the NJ Business and Industry Association (NJBIA) to establish such standards. Riggs explained no private businesses offer that type of training, and the State Police wouldn’t offer it to civilians. They are continuing to work on the issue with the NJ Chamber of Commerce and other stakeholders.