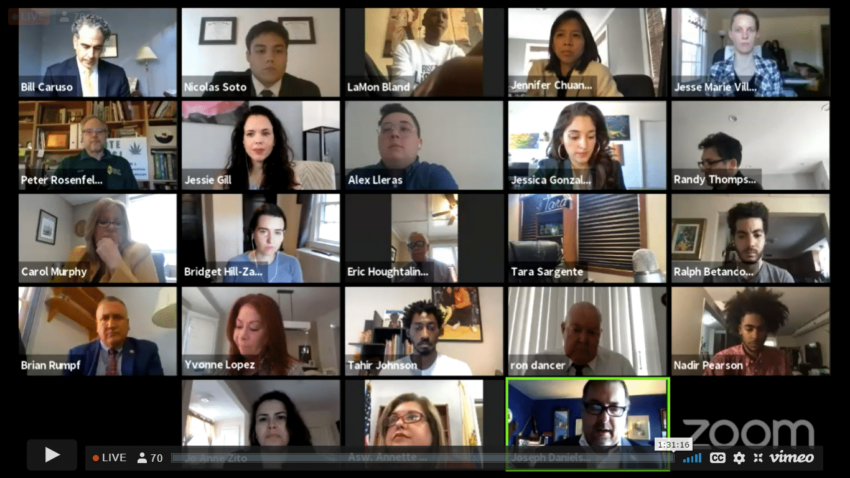 The New Jersey legislature pushed cannabis legislation through the committees after the bill to set up the cannabis industry was introduced late Friday night.

“It’s taken years and years for people to come around. The people have spoken,” State Senator Nick Scutari (D-Union) said. “The Drug War in this country and this state has been a miserable failure.”

Scutari’s hearing did not even have a camera, merely audio for the public.

He said he was laughed at for pushing for cannabis reform initially.

“This will erase years of discrimination,” Ruiz added.

Ruiz called her bill “the most progressive decriminalization bill in the nation.”

In her cannabis legislation, all pending marijuana charges dropped, and records are sealed.

“A lot of work was done to get this bill here today, and a lot was compromised,” Ruiz said. She thanked the Reverend Charles Boyer and the ACLU and others for championing this.

“When did hashish show up in this bill? Sen Mike Doherty (R-Warren) asked angrily, “I’ve never seen hashish in this bill. Did the people of New Jersey know they were voting on hashish as well?”

“We’re taking away one of their tools?” he asked.

If a car is driving erratically, they can be charged for that instead, Scutari explained.

“Basically, the smell of marijuana can never be used?!” Doherty exclaimed loudly.

“Our proposal is to create equity applicant status,” Fajardo said.

“We need to get this marketplace off the ground. We do not want to overtax and overburden the product,” Scutari replied. “My number one priority is to get rid of drug dealers. So, I understand the need to undercut the black market.”

“The divvying up of the spoils of the program should be done through the legislative process,” he added about funding impact zones.

“You can’t keep it from getting it into the black market,” Scutari said. “He also said he thought it would hurt the legal market.

“I’m opening to revisiting it in the near future,” Scutari added. He said regarding police seeking to pull over drivers and test them, “It’s like with the smart gun tech. it’s not really available. It’s not going to be perfect. I guarantee you we’ll be here making adjustments to what we pass.”

Labor issues were raised for workers who are drug tested and could lose their job as a result.

“There’s so many different sections of the bill, it’s really hard,” State Senator Paul Sarlo (D-Bergen) said. He said there seems to be a conflict between drug testing workers and the desire to legalize for all.

“What do you want me to put in there?” Scutari asked.

“The testing is not there. That’s the problem,” said Sarlo. He added people could lose jobs.

“How do you judge impairment for an employee? I think that clarity has to be made,” said Tony Russo of the Industry and Commerce Association of New Jersey testifying.

Allison Jones spoke for the NJ Judiciary and wanted criminal codes sectioned repealed and not amended. She said expungement and dropping of cases should be done automatically.

“We could dismiss those cases in four months. If we don’t, it will take quite a bit longer,” Jones added.

“Congratulations on getting this to the point it is,” said businessman and advocate Patrick Duff said.

Duff said the sick and old wouldn’t have access and advocated for homegrow.

He also voiced concerns with micro businesses eligibility for entrepreneurs.

Duff said someone should be able to open micro-businesses anywhere.

“Your best shot is to eliminate the felon bans and include us. I’m selling marijuana right down the street. The black market is thriving right now,” Weedman said.

Scutari said he was not banned from the market.

“There is no felon ban?” Forchion asked.

“Not in this one.” Scutari. He said his old bill did.

“I don’t see how you’re going to eradicate the black market,” Weedman said, including himself.

Weedman explained the issue was there is no expungement for distribution charges.

“Five lbs. isn’t really much when you’re talking about distribution. I have five lbs. down the street. I can sell that in a week,” Weedman said. “Include us. That’s all I wanted to say.”

Scutari said they compromised on five pounds and increasing that would lose them votes.

“We’ve been fighting for police to get their cards. It’s a shame police are victim to opiates,” said Edward “Lefty” Grimes who spoke on behalf of the Sativa Cross activist group.

He noted there is still no home delivery for patients even though it became law last year.

“Was Rosa Parks wrong for sitting at the front of the bus? The law was wrong,” Grimes said regarding cannabis.

Professor Stephen Marcus of Rutgers had concerns about edibles and access to minors. Scutari said the cannabis legislation addresses that by making the packaging bland and childproof.

Senator Troy Singleton (D-Burlington) said he wanted included in the cannabis legislation assistance with capital and setting up funds to go to impact zones. He noted Scutari is working on this. Singleton said he is working with Turner on the impact zone issue.

Scutari said the New Jersey Economic Development Authority (NJEDA) will work on that in a new bill.

“I’m not happy with us doing this so quickly,” Cardinale said before abstaining from the vote.

Senator Shirley Turner (D-Mercer) said there is a need to provide communities most hurt by the War on Drugs. Ruiz said on Thursday she is introducing a bill for impact zones and school funding.

Scutari said there were going to be amendments to the bill.

“I’m trying to do the best I can,” he said. “I don’t know if we’ll be ready for this next week,” he said in terms of timing.

Advocates sought to testify on the Assembly Oversight Committee hearing while they started at the same time.

Assemblyman Joe Danielson (D-Somerset, Middlesex) presided over the committee. Danielson was a sponsor of the Jake Honig Act.

Nathan gave testimony for labeling and standards for dosing.

“I came to cannabis first as a patient,” Jessie Gill said.

“There are many amazing cultivars out there that could help patients,” Gill said. She noted some are not commercially viable to grow. Thus, homegrow is needed.

“We don’t want George Norcross to bring the Marlboro of cannabis to New Jersey,” Oseguera said.

Villars said it has been too hard for individuals to obtain a medical cannabis license due to the high costs. She also noted the need for cannabis lounges and homegrow.

Danielson said he approves of homegrow.

Michael Torpey of Eaze spoke as well. Eaze has been a long-time back of cannabis delivery and comprehensive legalization.