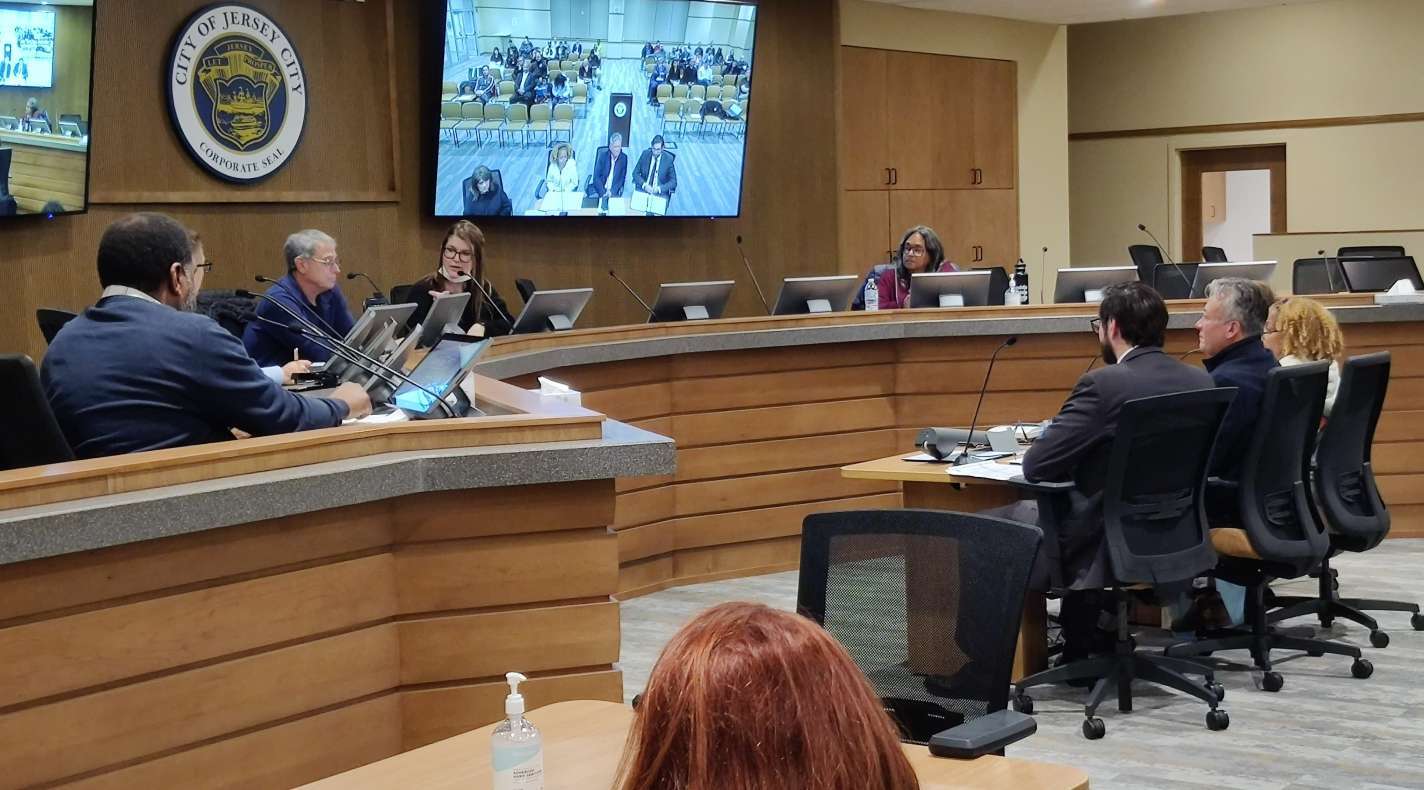 The first application was Strictly CBD at 394 Communipaw Ave. Their cannabis dispensary application was approved by the Planning Board in March. Co-owner Venus Smith said she has lived in Jersey City since 2005. They opened their store in 2018.

“I’m one of the founders of Black Wall Street, Jersey City chapter,” she said.

Co-owner Jeffrey Devine said he worked with doctors to educate them on the merits of CBD.

“I’m an LGBTQIA plus person too,” he noted.

Devine explained they were in Ward F, but the lines were changed, so they’re in Ward A.

Smith said they backed the Kismet of Kings charity. Devine said they also helped with a health fair at the Bethune Center. They want to help other minority-owned companies get cannabis licenses.

Smith said they want to help people from their zip code and one nearby and help with associated fees.

“That’s not realistic for a mom and pop. The things in place don’t make it easy currently for people like us,” Devine said.

He said they want to hire people and give scholarships for budtending courses.

They both described wanting to hire people from the minority-majority neighborhoods of the city where they are based.

“I’m always out and present at the store,” Devine said. “I’ve got them organized so we can get things done in our area.”

He said they will not be open on Sundays to be respectful of nearby churches.

“Are you going to continue to do CBD?” Vice Chair Jeff Kaplowitz asked.

It was noted Strictly CBD won’t be able to sell CBD if it converts to adult-use cannabis.

“I think it’s silly we can’t do it. CBD is a great way to even it all out,” Devine said.

He said they get along well with their neighbors and have worked with the Jersey City Economic Development Corporation.

“It seems these businesses are all partnering w the same non-profits. It’s a bit of a concern to see the same names. I do know the health department has a list of 800 vetted non-profits. I would encourage you to look through that list for new names,” Board Chair Brittani Bunney said.

They were approved 3-0-2 by the Cannabis Control Boars, with Commissioner Courtney Sloane recusing herself and HHS Director Stacey Flanagan absent at the moment.

Attorney Tom Slattery filled in for Board attorney Ron Mondello after he recused himself.

The next application reviewed by the Cannabis Control Board was Lifted Vision at 481 Central Ave, represented by Mickey Weiss, who said they were a woman-owned business. He noted they were approved by the NJCRC in October.

Jeanette Rodriguez said she was raised in Jersey City and now lives in Union City.

“I lived on Central Ave my whole life,” she said.

Rodriguez said she previously managed other stores. She explained Ward D Councilman Yousef Saleh said she should speak to his sister, who runs a self-defense training class, and so she will partner with her. Rodriguez noted they were 100 percent Hispanic-owned and wanted to hire to reflect the city’s diversity.

She added they had a Labor Peace Agreement (LPA) with the UFCW whereby they would not thwart their efforts should their employees seek to join their union.

“I had a rough upbringing growing up… so I want minority women to know they can work hard and achieve their goals,” Rodriguez said.

“You have two other partners. Where are they? Perkins asked.

Rodriguez said her partners could not make it. She added they would work with Saleh on his holiday charity efforts.

“Are the other owners Jersey City residents?” Perkins asked.

Rodriguez said one was, and the other previously lived in the city.

It passed 2-1-1-1 with Sloane voting no, Bunney abstaining, and Flanagan absent.

The next application was Chilltown Dispensary which would open at 326 Central Ave. Jared Pollard and Michael Carbone are the owners. Carbone is a veteran but has cancer and is receiving treatment in Florida.

Pollard noted they are owned by himself, an African American, and his partner, a disabled veteran. He explained he moved to the city 20 years ago, and he created a real estate development firm. Although he moved to South Orange, “we very much still consider Jersey City home.”

Pollard read a statement from Carbone saying he grew up in the Heights and started a contracting business. They have worked with many groups that seek to help troubled youth.

Mondello said the NJCRC awarded the license to Jared Jackson.

He noted the cannabis lounge regulations are pending, so they were focused on the dispensary part of the application.

“We are waiting on the State to issue their guidelines,” Bunney said.

JP noted they need Planning Board and city council approval to secure an annual license.

Tom Donahue of UFCW 360 spoke in favor of them in lieu of Hugh Giordano.

(Note: Heady NJ is partnering with the UFCW 360 to hold the Working in South Jersey Cannabis Gathering on Saturday, January 21st)

“Will it be you handling the day-to-day?” Sloane asked.

He said they are working to find a General Manager.

“It’s hard to folks to talk in a serous way until you’re further down the hiring path,” JP said.

“I don’t think any street in Jersey City should be filled with an abundant amount of dispensaries,” Bunney said regarding their location.

“The council didn’t put in their ordinance a limitation. There is a problem with Newark Ave and Central, but it’s not in the ordinance,” Kaplowitz said.

“It does say we’re supposed to look into the number within 1000 ft of each other,” Bunney said.

Jersey City Commerce Department Director Maynard Woodson noted there is a publicly available map of where the approved applicants are.

“It’s kind of unfair for a minority-owned business for us to say, hey, there’s too many,” Kaplowitz said.

“It’s a competitive landscape, like a restaurant. It’s up to them to be competitive,” Sloane said.

It passed 3-0, with Bunney abstaining.

Lady L Cannabis at 547 Westside Avenue was the next application reviewed by the Cannabis Control Board. Attorney Chirali Patel noted they won a conditional license from the NJCRC in July.

“I am looking to get my own part of the American Dream,” owner Lilliana Holland said.

She explained she immigrated from communist Bulgaria in 1990. Holland said she markets Big Pharma companies, so she understands regulation.

“It is a privilege to hold a cannabis license. I don’t take this lightly,” she said.

Holland would be the 100 percent owner of the company. She wanted to help a charity called Sarah’s Daughter with marketing. Holland also wanted to work with the Jersey City Anti-Violence Coalition led by Pamela Johnson.

Patel said she would organize an expungement clinic for Lady L Cannabis. She was a micro-business applicant.

Garden State Greenz consultant Frank Robinson said they are too close to another dispensary.

Mondello said there was an exception for 600 ft.

“Once the governing body (council) issues a resolution of support, the pin goes in,” Mondello said. “We’re going to base it on a pin in the map. We’re going to advise them… there’s a chance you’re going to be denied.”

He noted the resolution of support makes it so a dispensary can claim territory that the Law protects.

“It’s up to the council. They may say they will grandfather you, approve you or deny you,” Mondello said.

“We’re pitting them up against each other,” Flanagan said.

“We’re making a recommendation to the council,” Bunney said.

She noted applications need Planning Board and CCB approval before securing council approval.

“In some of those cases, it will be grandfathered in,” Woodson said. He noted some were approved by the Planning Board first when the CCB is supposed to be first due to the delays.

“We are building the plane while we are flying it. It is what it is,” Mondello said.

They were approved 4-0. Kaplowitz was recused.

Backpack Boyz LLC at 746 Grand St was the last application reviewed by the Jersey City Cannabis Control Board. They have a licensing agreement for the name. Co-owner Elizabeth Sandberg of Allendale, NJ, said she is an immigrant who started a plant nursery 25 years ago with her husband.

Her son Brett would be the dispensary manager. He is the manager of their nursery. Brett launched a cannabis company in California a few years ago.

“So, you have a license to cultivate in California?” Mondello asked.

“My mother has really harped on Jersey City. It’s close proximity to New York, where she’s from,” he explained.

“Nobody lives here. Why is it that you love it, but you can’t live here?” Perkins asked.

“I plan to,” Elizabeth said.

“I actually fell in love with the building,” Brett said.

Kaplowitz said the building had been abandoned for several years.

Bunney noted they were the first dispensary to get approved in Ward F.