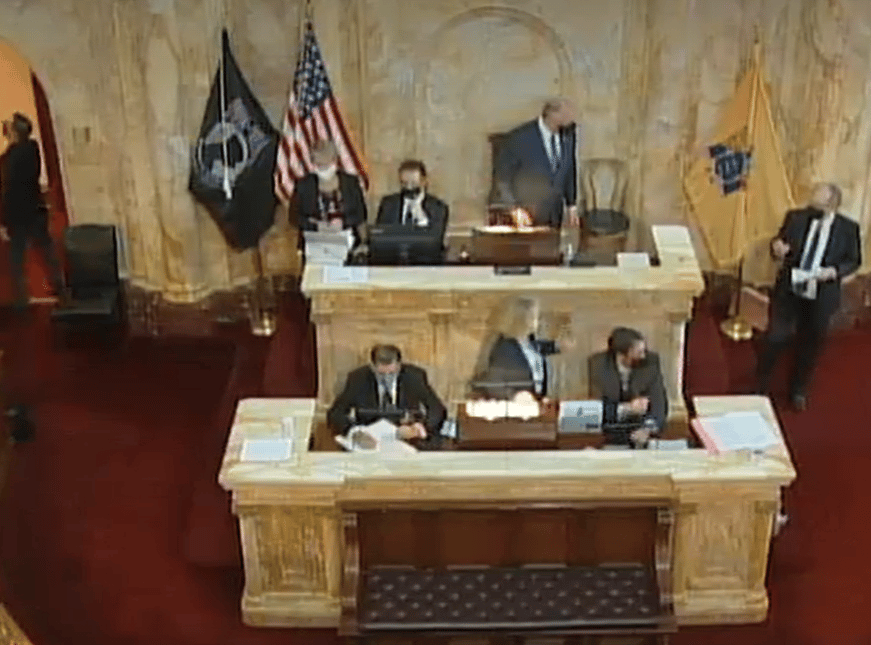 After admitting Monday they did not have the votes, NJ legislators have made progress on passing the decriminalization and the implementation cannabis bills.

Whether it was intentional or not, the inclusion of magic mushrooms has indeed stalled the process.

However, a compromise seems to have been found whereby the poison bill of lessening the charges of magic mushrooms will be addressed in a second bill introduced by Assemblyman James Kennedy (D-Union). He is from the same legislative district as cannabis sponsor and Judiciary Chair Nick Scutari (D-Union).

Regardless of whether or not enabling legislation and decriminalization pass, the constitutional referendum is going into effect in 28 days. What that means, though, is going to be up for debate.

The disagreement might lead Governor Phil Murphy to convene a meeting between himself, Senate President Steve Sweeney (D-Gloucester), and Assembly Speaker Craig Coughlin (D-Middlesex) to hash out a deal.

Social justice advocates have been pushing that the tax revenue gained from cannabis sales should go toward the Hispanic and Black neighborhoods (or “impact zones” as they’re known) most harmed by the War on Drugs.

However, some feel if cannabis is taxed at a rate that is too high, then it will hurt the nascent market. Thus, it has been proposed to dedicate the funds via a second referendum and constitutional amendment.

The cannabis bill to put another referendum on the ballot is sponsored by Senators Sweeney, Scutari, Teresa Ruiz (D-Essex), and Sandra Cunningham (D-Hudson).

With that many sponsors and co-sponsors, it has become clear this is their preferred course of action and is likely to happen.

Ruiz sponsored the decrim cannabis bill, and Weinberg is known as being very progressive in general. Thus, these are the natural leaders one would be expected to address the issue.

“It is clear that we need to do more to ensure that revenues from the legalization of adult-use cannabis are used primarily to remedy the devastating and disproportionate impact of the ‘War on Drugs’ on predominantly Black and Brown communities in our state,” the sponsors said in a statement.

“Therefore, we introduced legislation to put a constitutional amendment on next November’s ballot dedicating the majority of the state revenue from adult-use cannabis to support programs in Impact Zones,” they said.

Impact zones are defined as towns that rank disproportionately high in cannabis-related arrests and low in median income.

However, the cannabis bill would also dedicate funding to cops to train officers as Drug Recognition Experts or provide needed equipment. The funding would support state, county, and municipal agencies in maintaining public safety.

The constitutional amendment would apply to all state taxes and the Social Equity Excise Fees collected from the sale or cultivation of adult-use cannabis. The cannabis bill would allocate 70 percent of sales tax revenue and 100 percent of excise fees to social justice reforms in the targeted communities.

The remaining 30 percent would be divided up to support the work of the New Jersey Cannabis Regulatory Commission (CRC), of law enforcement personnel trained as Drug Recognition Experts, and other restorative justice programs in Impact Zones.

The optional two percent sales tax raised by municipalities choosing to allow adult-use cannabis businesses within their borders would be used locally.

The referendum passed last month with 67 percent of the vote. With two vague paragraphs spelling out the details, there was something in there for everyone: People who wanted the boost to the economy, an end to arrests, social justice, and the pleasure of consuming cannabis.

Dedicating the revenue to help minority communities does not have the support many wished it did in the New Jersey legislature.