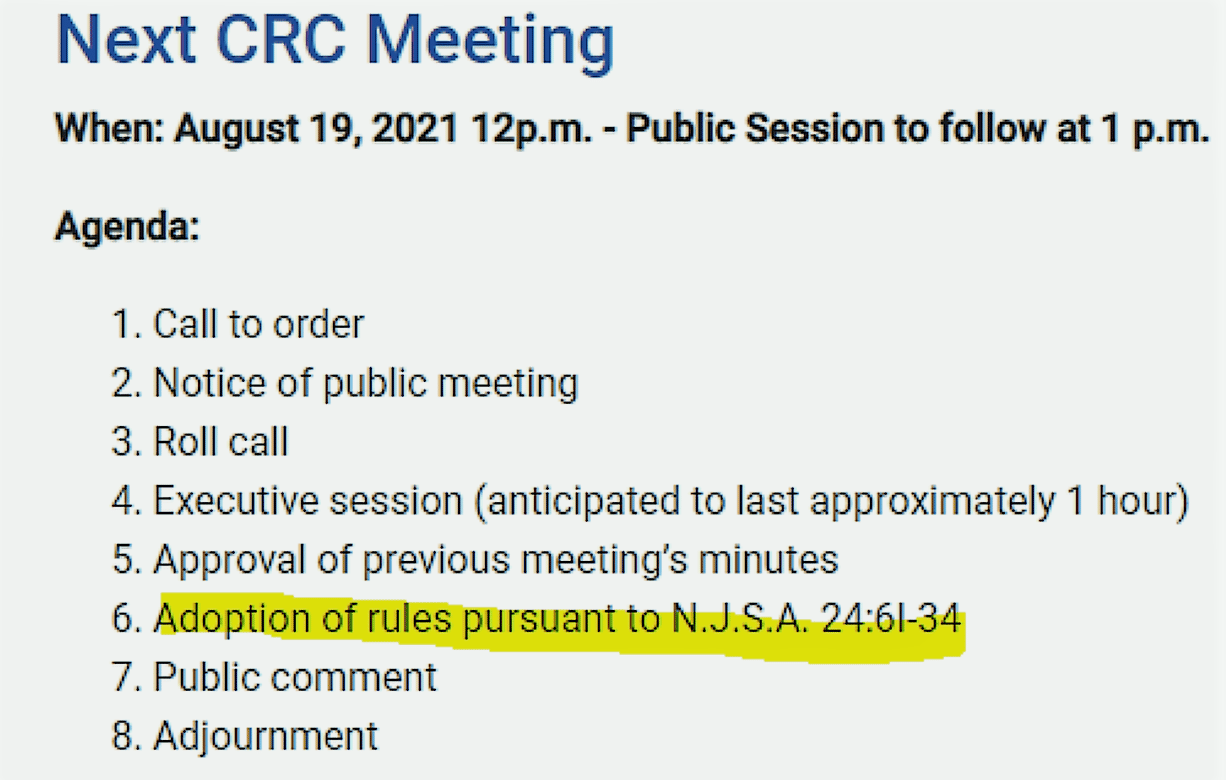 The New Jersey Cannabis Regulatory Commission (CRC) has announced that cannabis regulations for the adult-use market will be released during their Thursday meeting.

Thus, they will be releasing the rules two days earlier than the deadline of August 21st, a Saturday. The public portion of the meeting begins at 1 pm.

They were initially scheduled to meet on August 3rd, during which the public was going to be able to make comments to the CRC before the cannabis regulations were announced.

As part of setting up the adult-use market, the cannabis regulations should contain guidance for towns that have passed temporary bans, like Princeton in Mercer County and Dover in Morris County. Along with other towns, they decided to wait until the CRC has announced its cannabis regulations before making a decision regarding cannabis.

Thus far, the towns that have passed pro-cannabis policies have been forced to rely on a patchwork of guidance from a variety of lawyers, advocates, prospective applicants, and others. The New Jersey League of Municipalities released a model cannabis ban ordinance far sooner than any pro-cannabis model was established.

“It’s everyone’s favorite parlor game these days,” cannabis lawyer Daniel McKillop of the firm Scarinci Hollenbeck said regarding speculations on the 2019 medical cannabis round and the rules.

He said he is looking forward to a chance to digest and see what it means for clients and in general.

McKillop said he “hopes there’s a skeleton of foundational regulations pertaining to applications, timelines, deadlines, and a time period to relevant to the process.”

“Any clarity about the path forward and deadlines and subcomponents of the six different types of licenses would be very, very helpful,” he added.

McKillop noted New Jersey can be a leader in the cannabis industry given its population and geographic locations.

It’s been noted by several cannabis industry experts that New Jersey is well situated to receive a great deal of tourist traffic from neighboring states since a day or weekend trip from one major city to another is relatively easy on the East Coast versus the West Coast, where similar trips are more difficult since major cities are farther apart.

For example, people from Washington, DC, and the Baltimore areas could easily come to a South Jersey dispensary and enjoy the scenery for a weekend.

Similarly, New Yorkers can cross the Hudson River and access adult-use cannabis dispensaries that will be open in Jersey City, Hoboken, and enjoy cannabis consumption lounges. While Bayonne isn’t accessible via the PATH train as Jersey City and Hoboken are, its dispensaries could see a lot of traffic arriving via the Bayonne Bridge from Staten Island.

Since Governor Andrew Cuomo of New York resigned last week and there is no head of their CRC-equivalent yet, New Jersey is poised to open its adult-use market at least several months before New York does.