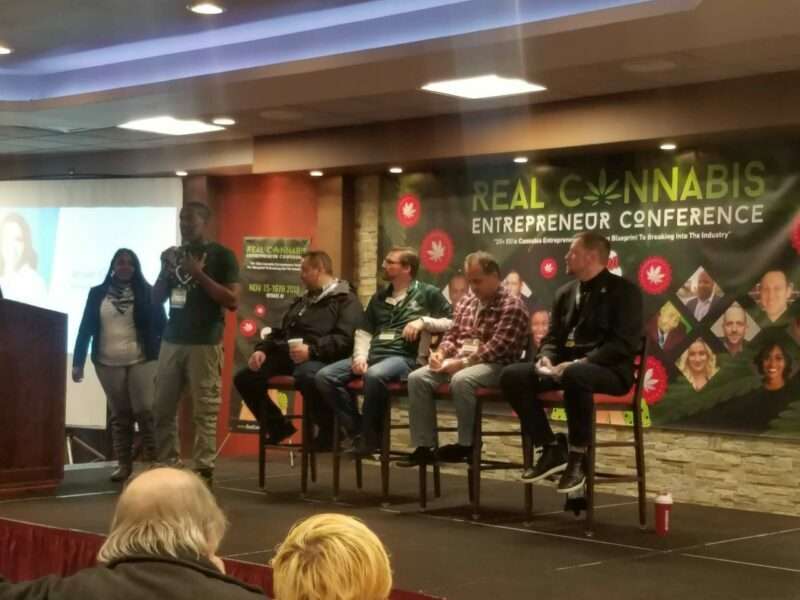 The Real Cannabis Entrepreneur 2019 conference was held last Friday and Saturday in Newark. It brought many budding cannabis entrepreneurs together to learn about the nuances of the industry.

Many speakers offered their own experience and lessons being in the industry to the audience.

The man who put it on was Gary George, the premiere cannabis entrepreneur, who, as Master of Ceremonies, had a great Barnumesque manner, having been in event marketing for many years. He personally thanked his wife Marie who was assisting manage the conference and credited her with encouraging him to pursue cannabis professionally and to put together the conference.

George said he has only used herbs since 19.

“Cannabis was just another level,” he said. He added that having not fond a conference that he was looking for, he launched one.

While largely about business, the need to address criminal justice and the harm done by the War on Drugs was brought up more than once.

On the topic of taxes, it was noted that the company Harborside, a Multi-State Operator (MSO) was audited and had to pay $11 million to the IRS because they were not keeping great records. They considered this win since they almost had to pay $90 million. This was referred to as the “legacy mentality”.

It was also noted that plant-touching companies cannot deduct their expenses from their taxes, a common practice among businesses that allows them to save a great deal of money. This is known as “280-E” after the section of the tax code that falls in.

One of them was a business called Juice Joint based out of Philadelphia and launched in May which makes high-quality infused juices. (The juice is exceedingly good, especially the Peach Lemonade.) They were looking for an investor to put in $100,000.

It’s owned by a couple where one partner works at a recording studio with award-winning artists and she is a molecular biologist and thus jokingly called the “brains of the operation”. They described it as a perfect product to exploit the emerging industry. They said they had been selling out their supply of bottles regularly and had gained a distributor in New England as well as a store in the Deptford, NJ mall and were making great money.

“Know your numbers,” Dr. David Cunic said after they could not remember a precise figure regarding the industry. “Name your experts.”

When prompted, they said the top three merits said it’s long-lasting, stronger than other juices, and it’s tasty.

“There’s a lot of juices out there that taste like bong water,” she said defending her product.

Given the nature of laws, they said they were selling cups at a fair in New England and then giving away the infused juice for free, a loophole exploited by others.

The fact that they were dating gave one shark pause. But after much discussion, they turned around.

Cannabis Businesswoman Diana McElroy on Marketing to the Public