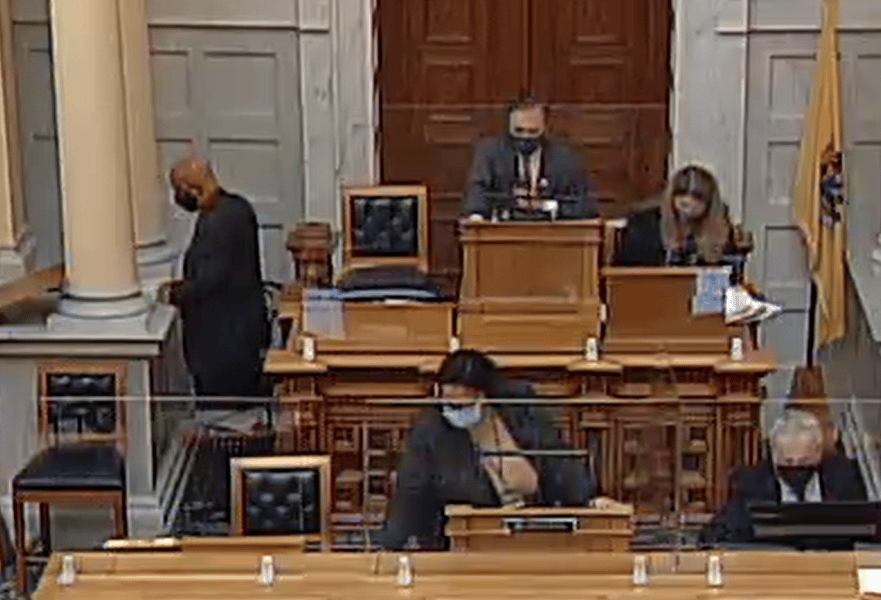 The Parental notification bill that their underaged child was caught with cannabis passed the New Jersey Assembly and Senate today.

The parental notification bill is A. 5472, “Requires notification to parent or guardian of certain underage persons for first offense of possessing or consuming alcohol, cannabis, marijuana, or hashish; bars law enforcement from transporting such persons to police station to deliver warning.”

Assembly members Conaway (D-Burlington), Downey (D-Monmouth), Houghtaling (D-Monmouth), and Speight (D-Essex) are the primary sponsors and there are 14 co-sponsors.

It quickly passed in  committee earlier this month.

“The bill doesn’t go far enough,” said Assemblyman Sam Thompson (R-Middlesex), complaining about legalization and measures taken to address police brutality. Other Republicans joined him in criticizing legalization, calling it a “mess” and “insulting to police.”

“Never have I ever seen such outrage about legislation,” said Assembly Nancy Munoz. She said a child could put themselves or others in danger if their parents were not notified they were caught.

In the NJ Senate, the parental notification bill is S. 3565 “Requires law enforcement to provide written notification to parent or guardian of person under age 18 who commits first offense of unlawfully possessing or consuming alcoholic beverage, cannabis, marijuana or hashish.” It has great bipartisan support.

“Marijuana was legalized for adults, not for children or teenagers,” said Senator Gopal (D-Monmouth). “Parents need to be notified if their underage child is using marijuana or alcohol so they can take the appropriate steps to protect them from the potential harmful effects of substance use at young ages and to help them make responsible decisions. Allowing parents to remain involved and informed can help to make sure that first-time offenders do not become repeat offenders.”

“The goals of social justice reform and greater economic opportunity through legalizing marijuana should not be achieved at the cost of parental involvement,” said Senator Lagana (D-Bergen). “As a father, I know that all parents would want to know if their children used alcohol or drugs. When they become adults, they can make responsible decisions based on well-informed, good judgement.”

“It is important to remember that it is still illegal for minors to possess or consume marijuana, alcohol, and other substances in New Jersey,” said Senator Greenstein (D-Mercer/Middlesex). “Parents should be notified of their children’s possession or consumption of drugs and alcohol. They have a right to know about any offenses to ensure that their children are safe.”

The legislation would require parental notification upon the first violation for underage possession or consumption of alcohol, cannabis item, marijuana, or hashish by individuals under the age of 18. Current law requires the parent or guardian of the minor to be notified after a second violation and provided information on how to access community-based services. They would also be notified for any subsequent violations, with the minor subject to a referral to community services.

Because the bills did not match, Gopal substituted the Assembly bill’s language into the Senate bill.

In the NJ Senate, Robert Singer (R-Ocean) complained the bill was weak. He said the mail might not reach them, and youth will lie about their address or try to intercept the letter.

“We are still not notifying parents legitimately,” he said.

Other Senators also complained about the bill and legalization.

“Unfortunately, it does not go far enough,” Senator Anthony Bucco (R-Morris) said. He advocated for a central registry to determine what number offense it is.

Bucco tried to amend the bill to make it stricter. However, his amendments were tabled.

“Young people have no place to go but the street corner,” he said. Rice also noted the restraints were put on “cowboy cops” to protect People of Color.