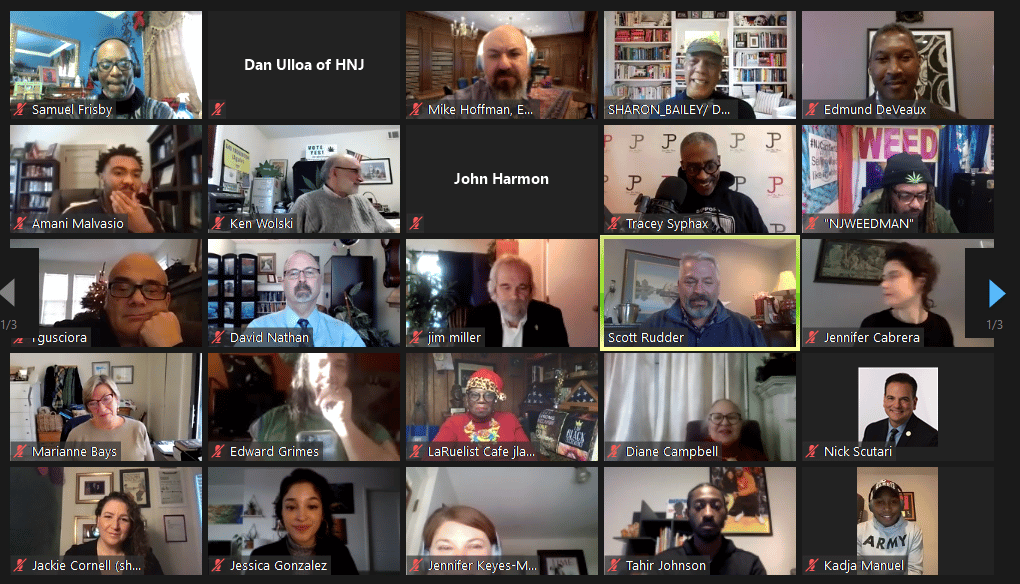 “We all have a great debt to pay to Ed,” Bailey said regarding Ed “NJWeedman” Forchion. He lauded NJWeedman and Ken Wolski of CMMNJ for their early cannabis advocacy.

However, “there is still much work to be done,” Bailey said.

The new NJCBA president Ed DeVeaux noted he was a business partner with Scott Rudder first at the lobbying firm Burton Trent before they launched the NJCBA.

“You have left big shoes to fill. I hope I do the association justice as you have,” DeVeaux said.

“I’m humbled by this recognition,” Rudder said regarding the award he was presented with by Black Cannabis.

He commended NJWeedman and Lefty for their cannabis protests.

“I am so thrilled we got to the other side of legalization,” Rudder said.

However, “homegrow for patients still needs to happen,” he said. “We need to ensure the social equity promises are fulfilled. That’s a continuing conversation.”

Senator Nick Scutari (D-Union) said he hated the hypocrisy of people being arrested for possession, which drove him to sponsor NJ cannabis legalization.

Sinha noted the first version of the NJ Cannabis legislation by Scutari only funded police and the Cannabis Regulatory Commission (CRC). Only when there was massive pushback was social program funding included.

“I’m happy we got it done,” Scutari said, noting it barely passed the legislature despite the 67 percent the referendum received.

“There’s a lot of people who can’t wrap their head around the fact that this will be legal. I can’t imagine what police officers are thinking. This is just the beginning,” Scutari said.

The cannabis proponent and anti-vaxxer Jamel Holley (D-Union) said it was about helping communities most hurt by the War on Drugs, especially Hispanic and African American communities. He lamented the cap on large-scale licenses and acknowledged many want homegrow. Holley said many legislators couldn’t wrap their heads around homegrow, given the complexity of legalization.

“I foresee us revisiting that next year,’ he said.

“Everybody knew the ballot question was going to pass. It was a question of the margin and why,” Sinha said. He noted, among cannabis referendums, it passed with the largest margin and every county in the state.

“We led with racial just messaging every step of the way,” Sinha said. But “It is not perfect. It’s missing key elements,”

“Congratulations to everyone who has been working on this issue,” said cannabis attorney and a key architect of Amendment 64 for cannabis legalization in Colorado, acting CEO of the Cannabis Trade Association (CTA), Christian Sederberg.

He said that when Colorado legalized cannabis, there was not enough focus on social justice.

“This is one of the places we haven’t been leading,” he said.

Sederberg says implementation is always difficult. He added attorneys are good at finding ways to honor the letter but now the spirit of the law (a loophole).

“We’re always strapped for cash in the capital city,” he lamented.

Gusciora said cannabis legalization would give Trenton opportunities to develop its downtown into a viable place people would want to visit.

“There could be real pot tourism in the capital city,” he said. “We’re gonna have a big influx of marijuana tourists just like they do in Denver.”

“I agree with Weedman that it should go to higher levels because the drug dealers of the past have more knowledge than the corporate guys just coming in with money,” Gusciora added regarding expungements.

“Yesterday definitely wasn’t the end,” Jackie Cornell of the Colorado-based cannabis company 1906 said. She added under the Biden Administration, there will likely be a new version of the Cole memo to protect the state markets from federal intervention.

Former Trenton Mayor Doug Palmer of the dispensary Curio said once they get a license to operate in Trenton, they will employ 60 people in a multi-million-dollar business. Unfortunately, their application is tied up in the 2019 ATC lawsuit.

DeVeaux said He added the future cannabis application process needs to do away with arbitrarily giving points that caused many problems.

“Everyone has been waiting for the expansion of the medical program. And we still have not yet effectively accomplished that,” Bays said.

She said there is such fierce competition for only a few licenses where the large corporations from elsewhere have largely gotten the licenses. Bays noted the criteria included financial stability, and the state was looking for tax returns for the previous year as if their business had been granted a dispensary license.

“How is a local entrepreneur who wants to start a business going to do it?” she asked rhetorically.

“We would march in the streets, we were the other,” said Tara “Misu” Sargente of the NJCBA regarding early cannabis protests. She said that people started caring about cannabis reform seriously in 2018.

“I don’t want to see women left behind. There aren’t a lot of voices backing us,” she lamented. Misu noted that over 90 percent of Venture Capital goes to men.

“When you look at this entire bill… it’s illuminated some very real issues, like how black and brown people move in the cannabis space,” noted cannabis advocate and businessman Leo Bridgewater.

Bridgewater noted people need to pay attention to the individual appointed to the CRC. He said ancillary businesses like HVACs, packaging experts, and lawyers are all needed, especially since they are often more lucrative.

“This is going to go legal federally in a couple of years,” he said.

NJWeedman explained he is not happy with NJ cannabis legalization.

“I hoped it got snowed out!” NJWeedman exclaimed regarding the vote Thursday. However, “looking back to where we are today, I have to be happy, because yes, this was not the bill on the table in 1997.”

Nonetheless, he said, “The people providing marijuana to the citizens of the state of New Jersey didn’t get anything out of the vote yesterday. I talk to a lot of the people on the black market. They feel similar.”

Sinha believed the CRC should create incentives for those in the legacy market to be part of the regulated market.

“We are the reason this industry is here,” said Garden State NORML Executive Director Charlana McKeithen said regarding NORML’s history of consumer advocacy.

She noted patient consumers had not been mentioned much.

McKeithen noted that hemp is a good way to transition to the medical and adult-use cannabis industry since it is legal.

“Cannabis is here to stay,” she said.

“There’s not much light between the ATCs and the groups exclusively focused on the social justice narrative,” Susanna Short of the NJCTA said.

However, she said they oppose the cultivation tax essentially because they think they will have to pass the cost onto patients.