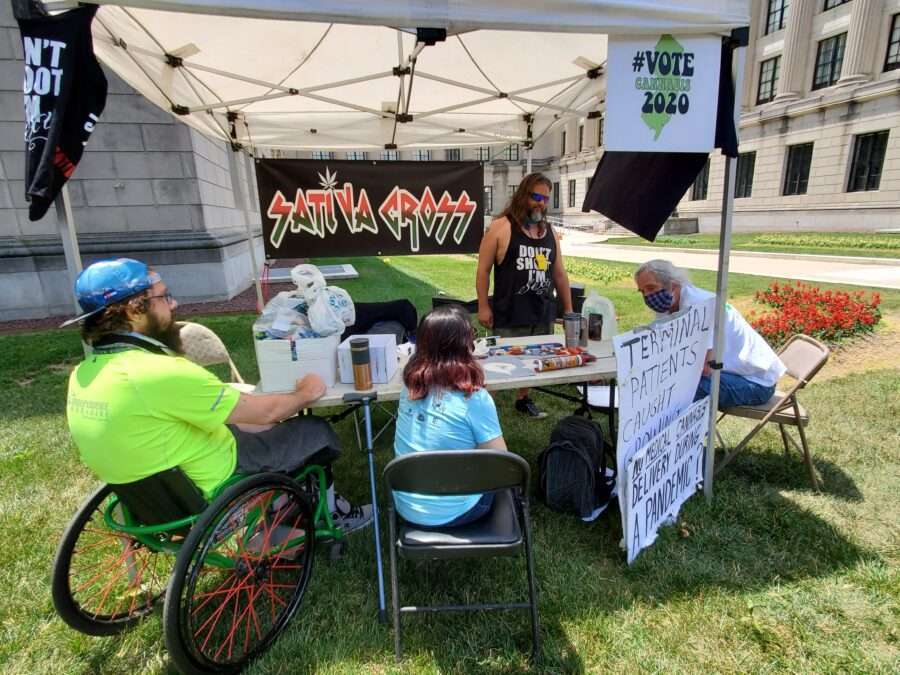 Edward “Lefty” Grimes is the lead activist of Sativa Cross: Ignorance is No Excuse, a group of radical activists who advocate with unconventional tactics and a podcast.

(This article is based on a podcast that was recorded on August 26th.)

Along with Lefty, Sativa Cross consists of activists Jeff Oakes, among others.

Recently, on a Zoom Eatontown council meeting, Sativa Cross thanked them for allowing a Garden State Dispensary auxiliary location on their Main Street along with wheelchair-accessible ramps.

Oakes said the dispensary in Eatontown was liable to be inundated since there are now many patients and few dispensaries.

They had a different experience in Far Hills, where the council is against cannabis.

(Fentanyl is a legal opiate drug stronger than morphine.)

“You’re ruining our meeting!” a councilman complained. Lefty said he started making strange static sounds because he could not hear Mike Vintzileos as “Mr.” Bongholeo.

Mike Vintzileos dresses up in a bong costume known as Bongholeo, and they often sing at meetings when confronting prohibitionist councils. Oakes said Vintzileos sacrifices since the costume is not comfortable. *

They started adding a song “You Can’t Get No Weed here” when advocating for dispensaries in different and went from there.

Oakes noted there are some advantages to zoom council meetings. For example, it is a lot easier to get people to log on from farther away to speak to the council instead of going to the town hall for the meeting. It can further show that there is popular support for a dispensary

Lefty said he wants to kneel for five minutes of silence and pray at a council meeting during the time granted to speak.

“To pray for the souls of the people in wheelchairs for that town,” Lefty said.

Lefty lamented many have health issues in New Jersey due to industrial pollution.

“We need all the help we can get in New Jersey,” Lefty said.

“We need hemp. We need cannabis. We need healing. Our state needs healing, and we need it quickly,” Lefty said.

Lefty said that with Mike Vintzileos as Bongholeo, they have flipped three or four towns in favor of a dispensary within their city limits.

Many small towns indeed dislike cannabis. Unfortunately, there are more towns against cannabis than in favor of it in New Jersey for now.

Lefty lives up to his moniker, “Christian Shock Jock,” both in his piety and outrageousness.

For those who believe in working together on minor issues in a nonconfrontational manner might be offended by Lefty and Sativa Cross.

Along with the advocacy, Lefty and Sativa Cross have a regular podcast.

Lefty said the regular protest was started by Jennue and Jax Stormes, who would protest at the Statehouse every Thursday. Six years ago, he joined them, brought speakers, and grew it into a podcast Satvia Cross. Jack had Dravet’s syndrome, the same disease the late Charlotte Figi had. They ultimately left for California.

Sativa Cross thus broadcasts from the front lawn of the New Jersey Statehouse as a mixed protest/podcast. They usually consume medical marijuana while doing so, which has improved. Because they set up at the Statehouse, it allows them to speak to legislators, aides, and officials who walk by. They confronted former Governor Chris Christie this way.

They have not been able to do the same with Governor Murphy. Before Christie left office, he set the Statehouse to undergo renovations, which have deprived Murphy of the Governor’s Front Office on the first floor of the Statehouse. His offices are down the street from the Statehouse, where they are not permitted to protest.

He highlighted the decriminalization and legalization rally last week, which Sativa Cross organized along with the Coalition for Medical Marijuana of NJ (CMMNJ) and Libertarian congressional candidate Jesse Ehrnstrom.

“We want the constitutional right to cultivate, to manufacture, to have it,” Lefty said.

“We need homegrow for patients immediately.”

Oakes said cancer patients need about an ounce of oil a month. $It’s about $200 for a gram of cannabis at a New Jersey dispensary.

“There’s going to grow licenses; there’s going to be manufacturing, vending licenses,” Lefty said. “I want the working class to get licenses for an affordable price.”

That’s going to be the next fight with the Cannabis Regulatory Commission (CRC) Lefty noted.

When bereft of money and establishment support, radical activism that “causes trouble” is the best way to build support in the manner utilized by the late civil rights leader, Congressman John Lewis.