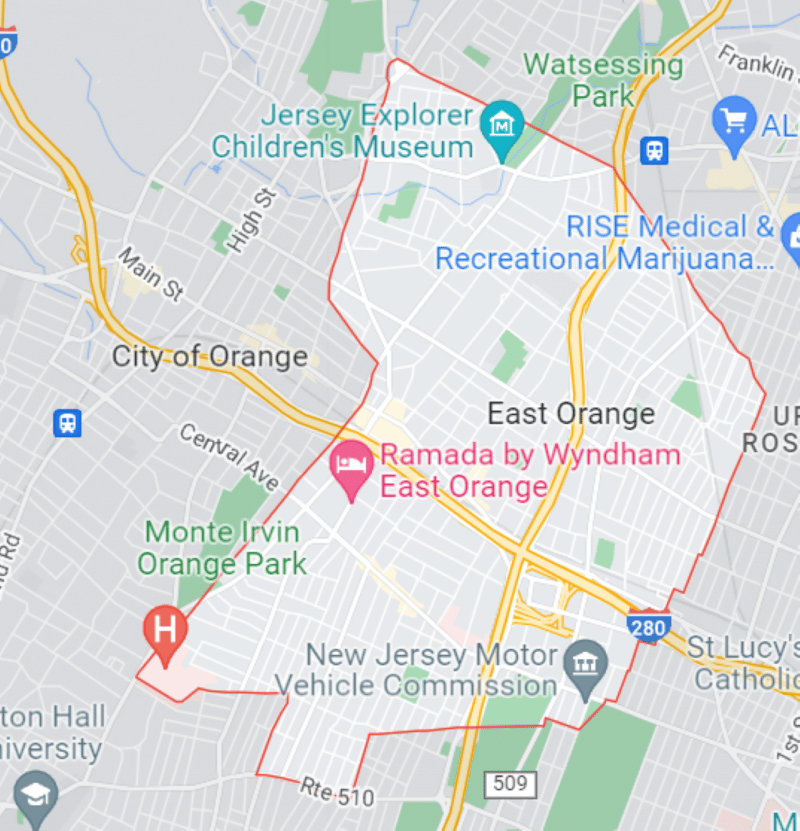 East Orange is the 10th New Jersey town that passed an ordinance allowing cannabis consumption lounges. However, finding a location will be a problem.

The city actually passed its ordinance, which included cannabis consumption lounges last year. However, no organization except Heady NJ is tracking the progress of local cannabis legalization implementation ordinances and publishing the results.

East Orange crafted an expansive ordinance that put low fees for license application, with the highest being $3,000 for regular cultivation, manufacturing, and wholesaling licenses, retail being $2,5,000. Micro businesses are charged less, with a delivery applicant only liable to be charged $500.

“I’m really excited that East Orange wanted to bring consumption lounges to the table. It definitely would be a great option for them,” said life-long East Orange resident Precious Osagie-Erese of Roll Up Life.

“East Orange is a progressive city. It is welcoming cannabis and seeing how the community can benefit seeing how it is an Impact Zone,” she explained.

Osagie-Erese believes it will help the city prosper in the long run.

“I think East Orange is one of the belles of the ball when it comes to areas. The city has been dedicated to making sure it’s done right,” she said regarding legalization. Osagie-Erese commended East Orange Mayor Ted Green for desiring to emphasize local ownership and said he is open to public feedback.

However, given the nature of the distance requirements, Osagie-Erese that there is not enough land in East Orange for many companies to apply. There must be 200 feet between places of worship, daycare centers, school, or a residence. Since towns are full of residences, this nearly nullifies the spirit of the law.

“It’s going to be wildly competitive,” she said.

Osagie-Erese noted at 3.4 sq miles East Orange is small in the first place.

“It’s already slim pickings. We’re not expecting to see a cannabis lounge on every corner. I think it will take them a while to launch a lounge. We have a lot of churches, a huge interfaith network, multiple schools,” she noted. “For small cities like East Orange, that can be a challenge.”

This is an issue in many towns across New Jersey, including Dover in Morris County, according to Sativa Cross advocate and Dover Cannabis Company co-owner Chris Velasquez.

East Orange is not the only town to have passed a cannabis industry so restrictive that it’s nearly impossible to find a location to establish a cannabis company.

“They’re looking to the State for guidance,” Osagie-Erese said of the towns.

Unfortunately, the NJ Cannabis Regulatory Commission (NJCRC) did not include cannabis lounges in their final rules released in August. Commissioner Krista Nash said to “stay tuned” on cannabis lounges when asked during a recent webinar.

Osagie-Erese noted the rarity and controversy around cannabis lounges, even in states that have been legal.

“It’s definitely one of the sides that are newer,” Osagie-Erese said.

She noted there are great misconceptions of lounges as smoked-filled rooms with no filtration system, which is not the case.

There is also the widespread misconception that those who have consumed cannabis will be stupid, violent drunks that will cause problems.

“I don’t see the rush on them, being as the industry is at the very beginning,” Osagie-Erese said.

In reality, every event that has mass cannabis consumption is very calm.

“Extremely chill, great vibes, like a coffee shop,” she said. “Those stigmas are just starting to break down. I think it will take some time before it manifests itself.”

While legal cannabis consumption lounges remain rare, in the legacy cannabis community, weed speakeasies or “weedeasies,” especially those that pop up, have become popular. In addition, Bring Your Own Cannabis (BYOC) events are becoming popular.

“The Mayor reached out to me, … as someone who has been actively practicing in this space since 2018.. to put together the ordinance,” she explained.

Matos noted the process was in the works for some time.

She said she based the East Orange cannabis ordinance on the state adult-use cannabis legalization law as well as he own experience being in the industry since 2018.

“The only guidance for what we have on consumption is the bill. We have incorporated it in East Orange in what the bill allows,” Matos said.

“He was very interested in allowing for all classes. He was open to whatever was available. He was not going to exclude any type of operation,” she said about Mayor Ted Green.

Regarding consumption lounges, “he said why not?”

Matos has stayed involved in setting up the East Orange Cannabis Board and created the application form and FAQs to start the process.

The New Jersey towns that have approved adult-use cannabis consumption lounges are:

The local legalization process has been a piecemeal, disjointed approach led by cannabis license applicants and attorneys. Many have been seeking licenses for themselves. Except for the attorneys, they are not very well-versed in local advocacy and creating public support like a political campaign. This is a widespread problem across New Jersey towns which are eager to limit the locations of dispensaries.

While advocates feel that cannabis legalization has taken too long and is far from what was fought for, the other side sometimes seems to feel like Order has disintegrated and the city is rioting.