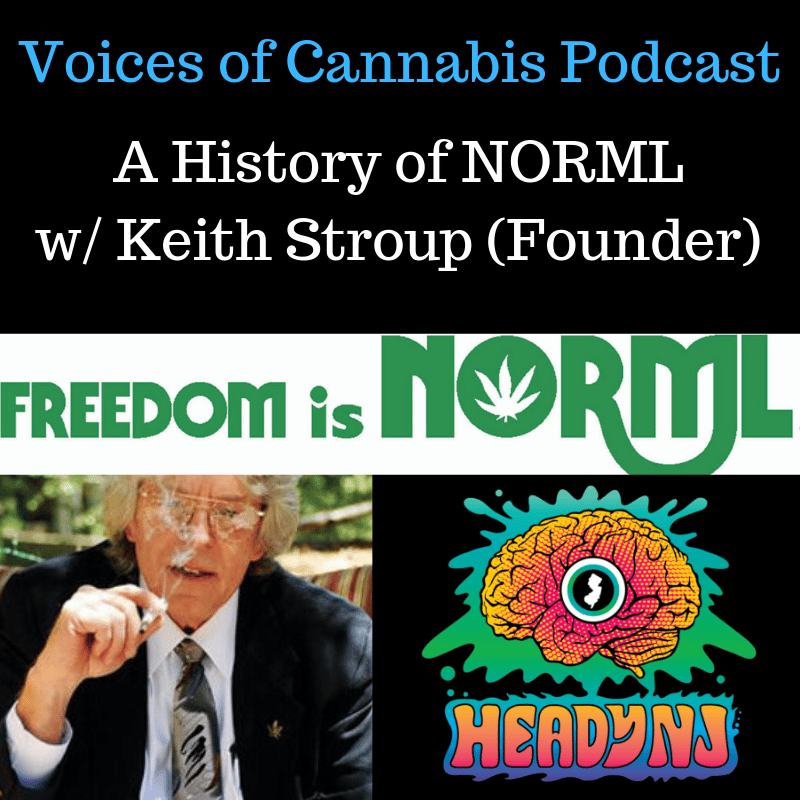 Keith Stroup is one of the original founders of the National Organization for the Reform of Marijuana Laws (NORML) which is the leading advocacy group in the world for cannabis reform and legalization.

Stroup graduated law school in 1968 at the height of the Vietnam War and of the anti-war movement. Like many of his generation, he was doing everything possible to try to find a way to stay out of that war because too many of his contemporaries were coming home in body bags and he did not want to think about that fate.

So, in 1968 a group called the National Lawyers Guild, which is still around and is a good group of radical lefty lawyers, were making themselves available at the time to provide advice to people who wanted to try to avoid the draft.

They actually reached out and offered Stroup a number of things. First, they offered to put him in touch with some psychiatrists in Baltimore who would say he was gay and back then if you were gay, it wasn’t a matter of ‘don’t ask, don’t tell’, the army or the military just simply didn’t want you. “Wow. I thought that was a kind of an intriguing possibility, but I was married at the time and had a small child and my wife wasn’t terribly comfortable with that.” They also offered to put Stroup in touch with some people in Canada if he wanted to leave the country which was something a lot of anti-war people were doing. Canada was putting out the welcome mat, but the problem is there was no guarantee they would ever be allowed back into the country and although Stroup certainly opposed the war in Vietnam, he wasn’t necessarily a spot in life where he was willing to say, “I never want to live in the US again.”

So, finally, the third option they came up with, was a deferment based on critical skills called the critical skills deferment and it was the provision in the draft act that said if the work that you were doing on the home front was important enough, then your draft board could give you a waiver from serving in the military and instead of that, you served those same two years at the domestic job you had, which in theory was important because the health, safety, and welfare of the country. Ironically, Stroup had just been offered a job by a commission called the National Commission on Product Safety, with Ralph Nader. It was a presidential commission, it sounded important and my draft board gave Stroup a deferment about two weeks before his report date!

Stroup had started smoking marijuana while a freshman at Georgetown law school. He often used accessories similar to what you would find on sites like https://www.kings-pipe.com/. So by the time the commission was over 1970, he had been smoking for about five years. At that point, he was too old to be drafted and so for the first time Keith Stroup describes having a choice to do sort of what HE wanted and decided he wanted to do public interest law, but the issue he wanted to work on was legalizing marijuana.

So in late 1970, along with some friends that he knew had a similar interest, he sat down and began to put together the outline for NORML. “I think we actually filed the corporate papers in early March of 1971, but we began to meet as a board of directors in October of 1970,’ said Keith Stroup.

What was NORML’s first order of business?

When NORML first started, the challenge really was to let people know that there was a lobby for marijuana smokers. There had been some people working on marijuana legalization even before normal, but not many.

“NORML would go to events and we’d have a booth or an exhibit or whatever. And mainly again, we didn’t have a lot of key achievements that we could point to because we had just started our work.”

However, it was initially sufficient that people saw that there were others standing up on their behalf. Most people at that point still thought marijuana smoking was something terribly dangerous and bad and should be avoided at all costs. And so if you were a marijuana smoker, it was rare indeed that you ran across any organization that was willing to argue that you shouldn’t be treated like a criminal, and it shouldn’t be a crime to smoke marijuana. So NORML’s message was one that was well-received by those who smoke marijuana at the time. But it is important to know that the Gallup polling organization had just done their first survey question in 1969 the year before we founded normal asking the American public how many people supported legalizing marijuana. Prior to 1969, they didn’t even think it was an important enough question to bother to ask.

How much support did NORML have in the beginning and how has that changed?

“When NORML began only 12 percent of the American public supported their position. Eighty-eight percent of the public were opposed to legalizing marijuana. So obviously we realized at that point that we had a lot of hard work ahead of us before we could expect to legalize marijuana. We had to change a lot of minds. We had to educate a lot of people. So, we sat about as soon as possible doing that.”

“In fact, when I look back now, after all these years, the first year where we finally reached 50 percent support of the public, I think was 2011. And today we’re up at 66 percent support. We have, I think five and the different national surveys, including Gallup that show between 63 and 66 percent support now. That’s incredible – That two out of three Americans now support legalizing marijuana when only 14 percent of the public are current smokers,” said Keith Stroup.

Enjoy? LISTEN to the PODCAST for the entire 45 minutes + interview. Check out our other episodes too! Click below to listen on YOUTUBE.