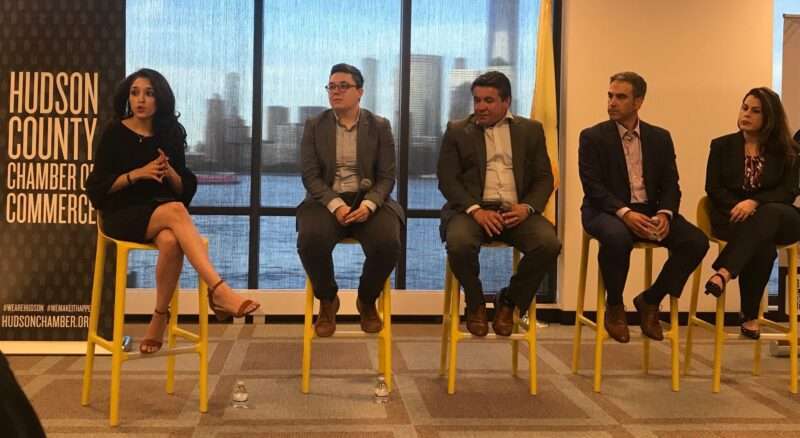 Jessica Gonzalez is a Hispanic lawyer who has been fighting for New Jersey legalization as a leader of Minorities 4 Medical Marijuana (M4MM).

In a short time, Gonzalez has become well-known in New Jersey cannabis. She has spoken on many panels, including more than one at Canna Pop-Up.

She was born in Ecuador and came to the U.S. to Jersey City when she was three and raised in the Heights. While Gonzalez went to college and law school in Boston, MA, she has yet to enjoy their legal market, which opened almost as soon as she left.

As a young lawyer, Gonzalez said she ended up in an existential crisis about what she was doing with her life.

“I always joked about being a cannabis lawyer because I never thought that could be a possibility,” she said.

It shows how different the circumstances are now.

“I saw cannabis law as an opportunity to help advance something that was new that came without precedent,” Gonzalez said.

She now assists clients with all the nuances of owning and operating a cannabis business.

“I feel grateful at 29 to have found something with a purpose and passion,” Gonzalez said. “A lot of attorneys typically don’t find that till later on.”

She explained many don’t understand legal issues, such as the nuances of a Non-Disclosure Agreement (NDA), which has severe consequences. She often educates her clients on the issue.

Gonzalez initially opened her own firm to handle cannabis clients. Gonzalez now works for the firm Bressler, Amery, and Ross.

“It was a huge risk on my part. It was the best thing I could have done for my career and to target cannabis, and that just accelerated my learning ten-fold versus working at a firm and getting assignments. I took it on myself to do everything,” she said.

Gonzalez first got involved with M4MM when she began working with their Vice President of Latinx Outreach Rani Soto on engaging communities. She has since become their General Counsel. In that position, she has helped teach three educational boot camps for aspiring cannabis entrepreneurs in Trenton, Camden, and Newark. They wanted to go to municipalities where the criminalization of cannabis hit the hardest.

“I want you to walk into a room with a lawyer and investors and know what they’re asking to do and what signing and obligations,” Gonzalez told the classes.

The party with better lawyers is always going to have advantages. Because the legal costs are very high, getting a lawyer is a barrier to entry itself.

Cannabis entrepreneurs need the information to succeed, or their wings will be clips from the beginning, Gonzalez explained. She said that despite being legal, CBD and hemp cause just as many headaches due to fluctuations in regulations

Gonzalez noted cannabis law is multi-faceted since it touches on health issues, economics, the rights of minorities, and civil rights. Unfortunately, the industry consists mostly of white men filling the C-suites.

M4MM is well represented in New Jersey. Leo Bridgewater serves as their Director of Veteran’s Outreach.

Gonzalez noted that while campaigning for adult-use cannabis in New Jersey, the lack of a formal implementation bill has been a doubled-edge sword. Many want a just, comprehensive bill that will launch the industry. The lack of one, though, has made some exceedingly wary it will look like the medical marijuana industry where a few companies charge outrageous prices.

Regarding legalization, Gonzalez said she would want it to have social equity programs receive revenue gained from the taxes, state-sanctioned cannabis education programs, loans or grants from cannabis revenue, technical assistance, and an incubator model.

While many have been pointing to the failed bill S. 2703 as a model for the referendum to follow, Gonzalez believes it has many issues, especially for micro-businesses.

“From a legal and business perspective, it’s trash,” she said.

Micro-licenses are outlined in the medical marijuana bill, the Jake Honig Act. The problem is they are restricted in many ways. For example, micro-businesses can have no more than a 5,000 sq. ft shop. There is also a cap on the number of employees that can work for a micro dispensary.

If cannabis businesses cannot grow, they might not be able to carry the burden of compliance with red tape. Gonzalez explained they will have fixed costs, but their profits are capped in a worst-case scenario.

“Are investors going to want to invest if they know you’re capped?” she asked.

Her solution is that micro licenses should be able to turn into full size after one to three years after opening when it’s proven they can comply with regulations and have a track record.

She is a proponent of homegrow, despite the difficulty it faces in becoming a law.

“It will happen, but right now is not the time,” Gonzalez said.

She said there should be a strong Cannabis Regulatory Commission (CRC) and a cannabis advisory board. Gonzalez said the boards are voluntary positions in other states filled by professionals that provide insight to the commission.

“I urge everybody in favor of legal and equity legislation to make it known what they would need to succeed. Because if legislators don’t hear, it’s going to be ignored,” she said.