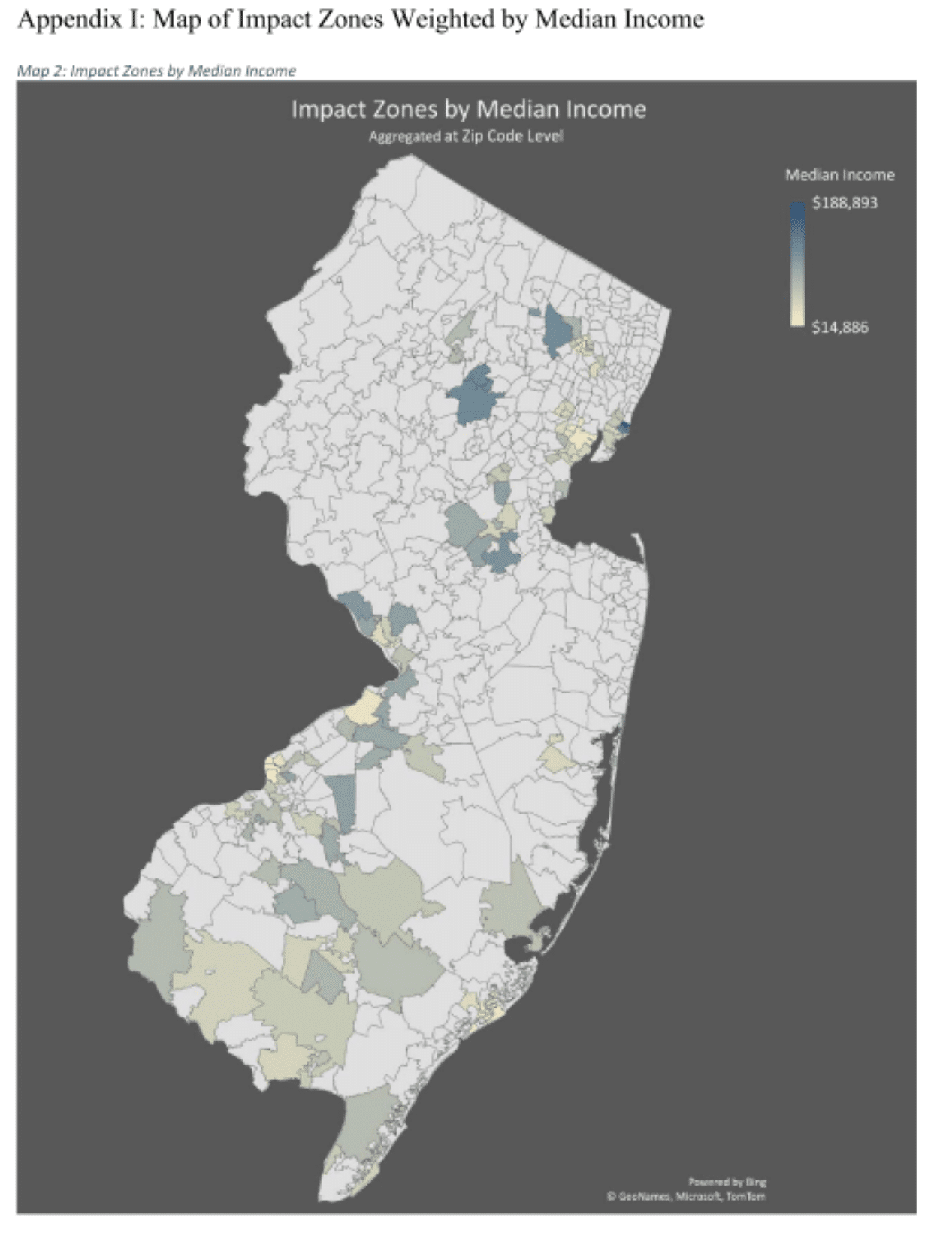 Attorney William Riback believes the New Jersey impact zones list is faulty since it includes towns that were not damaged by the War on Drugs. He is adding it to the lawsuit against cannabis prohibition enforcement.

A class-action lawsuit Drayton v. State of New Jersey was filed in the Superior Court in Mercer County by Riback alleges disproportionately arresting people of color for cannabis prohibition possession was unlawful. It’s especially critical of the penalties for cannabis crimes committed in drug-free school zones. It notes that the entirety of the minority-majority cities of Newark, Camden, and Jersey City are largely covered by these zones.

Riback explained the Plaintiffs represent individuals from Impacted Zones who would receive a diluted benefit due to the nature of the Impact Zone list.

“I was flabbergasted when I saw Mt. Laurel and Evesham as Impact Zones,” he said.

Riback believes that majority-white towns, that have not borne the brunt of the War on Drugs economically, will now benefit.

He takes issue with the methodology that leaves fairly wealthy, largely white towns classified as impact zones. Impact Zone towns are supposed to have been the towns most impacted by the War on Drugs. These were supposed to be the places where many able-bodied men served time for petty possession and similar crimes. Thus, they would have a harder time providing for their families upon release which adversely affected the economic conditions of their communities.

When one is released from jail as a felon, most employment is barred. Thus, many return to a life of crime where there are no barriers to entry for a job, or launching a business. Unfortunately, this usually ends poorly.

The issue is that, according to the Cannabis Regulatory Enforcement Assistance and Marketplace Modernization Act (CREAMMA), “at least 70 percent of all tax revenues on retail sales of cannabis items shall be appropriated for investments, including through grants, loans, reimbursements of expenses, and other financial assistance, in municipalities defined as an “impact zone.”

“The purpose of the impact zones that social justice advocates fought for was to address the harms caused by the War on Drugs and its disproportional impact,” Riback said.

In addition, to benefiting from tax revenue, Impact Zone applications are prioritized with the adult-use license application process.

The law says, “At least 25 percent of the total licenses issued to applicants for a cannabis establishment, distributor, or delivery service license shall be awarded to applicants who have resided in an impact zone for three or more consecutive years at the time of making the application, regardless of where the cannabis establishment, distributor, or delivery service is, or is intended to be, located.”

Also, workers can be classified as being from an Impact Zone to help a business meet that requirement.

The lawsuit was amended previously to help immigrants who have issues with their paperwork if their records are expunged since the U.S. Citizen and Immigration Services (USCIS), formerly Immigration and Naturalization Service (INS), doesn’t recognize state legalization and the expungement of what is still a federal crime.

The definition of an Impact Zone is laid out in CREAMMA.

According to the law, an “Impact zone means any municipality, based on past criminal marijuana enterprises contributing to higher concentrations of law enforcement activity, unemployment, and poverty, or any combination thereof, within parts of or throughout the municipality, that:

“(2) based upon data for calendar year 2019, ranks in the top 40 percent of municipalities in the State for marijuana- or hashish-related arrests … ; has a crime index total of 825 or higher based upon the indexes listed in the annual Uniform Crime Report by the Division of State Police; and has a local average annual unemployment rate that ranks in the top 15 percent of all municipalities, based upon average annual unemployment rates estimated for the relevant calendar year.”

“(3) is a municipality located in a county of the third class, based upon the county’s population according to the most recently compiled federal decennial census … that meets all of the criteria set forth in paragraph (2) other than having a crime index total of 825 or higher; or”

“(4) is a municipality located in a county of the second class, based upon the county’s population according to the most recently compiled federal decennial census:”

“(a) with a population of less than 60,000 according to the most recently compiled federal decennial census, that for calendar year 2019 ranks in the top 40 percent of municipalities in the State for marijuana- or hashish-related arrests …; has a crime index total of 1,000 or higher based upon the indexes listed in the 2019 annual Uniform Crime Report by the Division of State Police; but for calendar year 2019 does not have a local average annual unemployment rate that ranks in the top 15 percent of all municipalities, based upon average annual unemployment rates estimated for the relevant calendar year or”

“(b) with a population of not less than 60,000 or more than 80,000 according to the most recently compiled federal decennial census; has a crime index total of 650 or higher based upon the indexes listed in the 2019 annual Uniform Crime Report, and for calendar year 2019 has a local average annual unemployment rate of 3.0 percent or higher using the same estimated annual unemployment rates.”

Section 4 A and B are where the problem lies. Section 4 A removes unemployment out as a factor in determining the impact zone.

These towns might have police aggressively arresting individuals for cannabis possession and similarly petty crimes that might be driving their criminal statistics that lead them to qualify.

Section 4 B allows broad parameters for large towns between 60 and 80,000. The unemployment rate of 3 percent or higher is exceedingly low also. It also includes a lower crime rate.

“The methodology has no relationship to the War on Drugs and selects municipalities which are relatively above median income,” Riback said. “It looks like someone traded social justice.”

The following is the full list of Impact Zone towns:

It says, “the CRC should anticipate questions around how the very highest (perhaps above 110 percent) of the median income were disproportionally impacted, “based on past criminal marijuana enterprises contributing to higher concentrations of law enforcement activity” and high values in the various other social determinant criteria the legislature has outlined.”

The CRC lists the following towns as outliers:

Jersey City, Mantoloking, and Dennis township are the only towns not listed as qualifying under Section 4a.

“The list fails to meet its purpose in distributing cannabis sales tax revenue and that it’s not benefiting then the minorities who were victims of the War on Drugs,” Riback said.

Riback is thus asking the CRC to eliminate the Classes 4 A and 4 B criteria. He also wants to require any rescoring to require a top 15 percent employment rate.

“This is basically a giveaway to these towns,” he said.

According to the document, “The statute clearly states that all categories would not be used equally when in the definition of Impact Zones is states “or any combination thereof.” Thus, the CRC might find a way to address the situation.