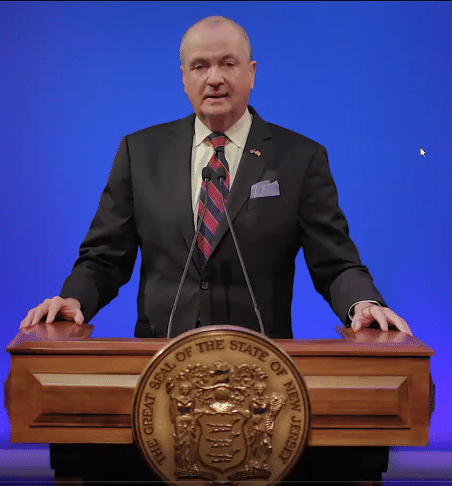 The impasse created by the clean-up bill’s collapse after pushback from legislators has not been solved as there is cannabis news out of Jersey City which wants to tax future medical cannabis sales.

Governor Phil Murphy gave the State of the State today virtually instead of inside the Assembly Chamber, as is tradition. While focused on COVID, he touched on cannabis reform.

Murphy said they are working on cannabis reform and noted the referendum’s passage supported by two-thirds of the state. He repeated the now-common refrain that cannabis prohibition disproportionately penalizes black and brown people. Murphy also said he wanted to help promote cannabis businesses owned by women, minorities, and veterans.

“This hasn’t been an easy fight,” Murphy admitted.

Legislators seem uneager to make this an issue further since the bills passed a month 25 days ago on December 17th and made cannabis news.

Murphy still wants some penalty to exist on minors.

He noted they have had two principles here present from the beginning.

“The last thing we need is more young kids getting tangled up in the criminal justice system. None of us want that,” Murphy said.

In addition, “this was never about legalizing marijuana for our kids. That’s never what this was about. That’s not what the voters voted on in the referendum,” he explained. “We somehow have to thread a needle that gets both of those accomplished.”

Murphy noted he is against mandatory minimum sentences for drug crimes, and they are working on a bill to address that.

His delay is denying justice for a lot of people charging with small amounts of cannabis possession.

Meanwhile, Jersey City made cannabis news yesterday since they seek to impose a tax on medical cannabis before it even gets a dispensary.

Mayor Steven Fulop explained to the Jersey City Council at their Monday caucus meeting before the Wednesday council meeting that he believes funds from medical cannabis should go towards the city’s affordable housing trust fund.

“We just thought the affordable housing trust fund is something that is in need and we wanted to be in support of,” Fulop said.

Money from a tax on recreational cannabis in the future could go towards other priorities such as public schools, as well as homeless and addiction issues, he added.

“Other states that have done this, they have received more revenue from recreational marijuana than medical marijuana. But I do think the affordable housing trust fund is a good place to start,” said Ward D Councilman Yousef Saleh.

Medical cannabis tax revenue is not likely to lead to a large amount. It might be cannabis news to politicians that medical cannabis is not covered by insurance. A tax on it only makes its cost more onerous for patients.

Jersey City has long been one of the towns in New Jersey more eager than others to advertise that they support cannabis reform.