A new academic high school providing a supportive environment for addiction support is now available to any student in New Jersey, from any county, who may be suffering from addiction and struggling with recovery.

On January 2, 2018, The Knowledge Empowers Youth and Sobriety (KEYS) Recovery High School opened and began, with its one classroom, at Brookdale Community College. The school’s mission is to provide an academically innovative and supportive environment which will serve to eliminate the achievement gap for adolescents who have been diagnosed with a substance use disorder and are seeking a sober, healthy, lifestyle, according to information provided by the district.

On January 11, more than 75 dignitaries including educators, politicians, philanthropists, and parents, attended the ribbon-cutting ceremony at Brookdale’s Lincroft campus, where the program is housed. 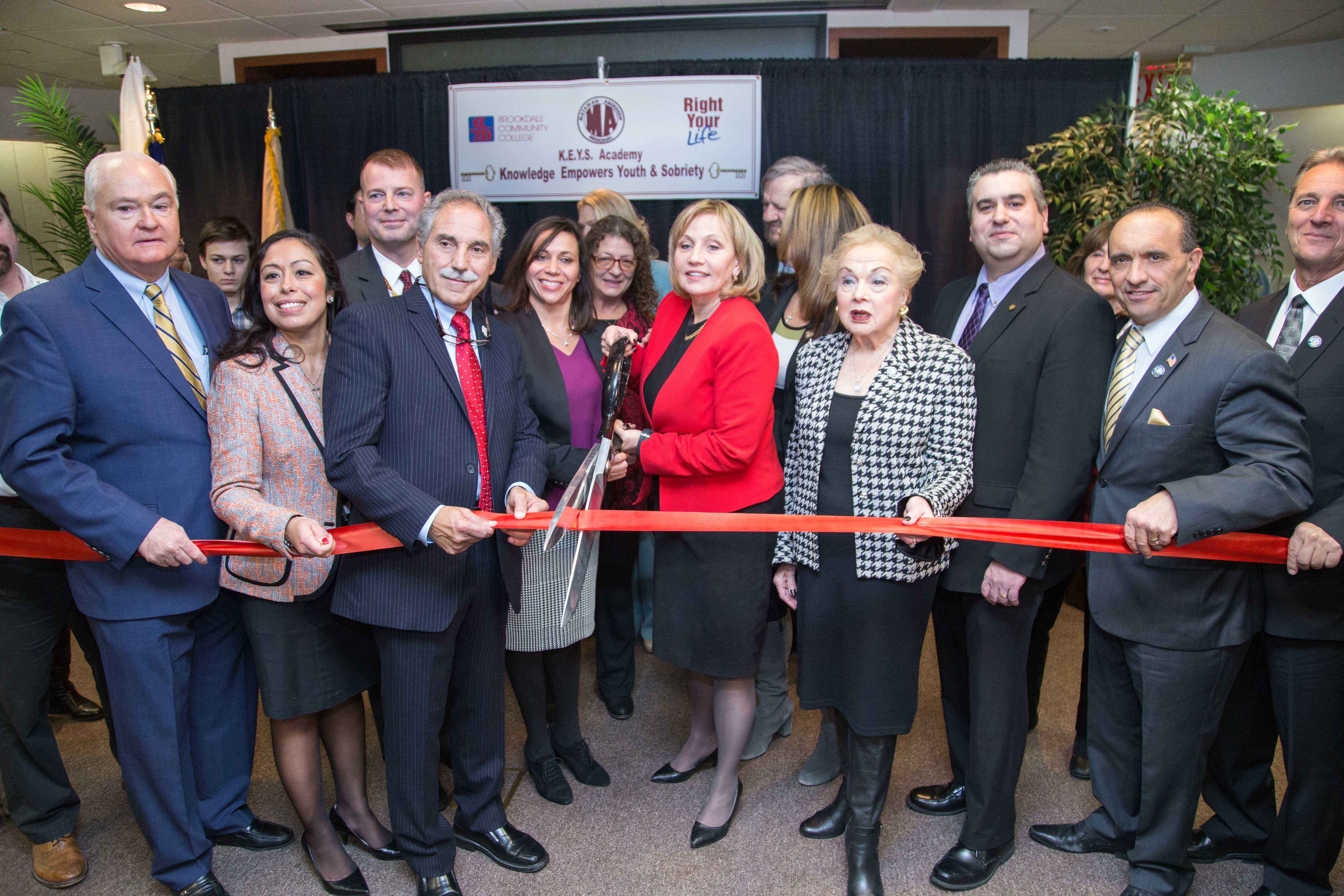 Former Lt. Governor Kim Guadagno, Matawan-Aberdeen Superintendent of Schools  Joseph Majka, Right Your Life President Kathleen Loures, interim Brookdale David Stout, were present. Additionally in attendance were representatives from the Brookdale Board of Trustees; the Monmouth County Board of Chosen Freeholders; the Matawan Aberdeen School District; and the New Jersey Department of Education.

“Everyday heroes are those people who see a problem and refuse to stand there and let it happen,” said Stout. “I want to thank the all of the everyday heroes who made this happen and welcome these deserving students to our campus with open arms. You will have a learning environment that is beautiful, safe, and provides all the support you need to continue your education. It is an incredible honor for Brookdale to be a part of this.”

“Not only is it providing academics, it’s providing social-emotional support in a caring environment. So you are getting both the academics and the social-emotional support because I think it’s essential that while a student is going through recovery that they are removed from the environment that they were in. This is an opportunity to do that, which I think will lead to success,” Majka said.

The school was funded through Gov. Chris Christie’s opioid legislation. The district applied for a grant, which it received from the state through the Department of Education for $1.3 million, according to Majka. The program was developed over the last two years with frequent collaborative planning.

“Monmouth County is one of the top six counties in the state which suffer from recovery or codependency issues,” said Guadagno, who along with Chris Christie has awarded millions of dollars to preventative and therapeutic programs throughout the state.

The school officially opened on Jan. 2 with 18 students. The school also has teachers, counselors, and a nurse, according to Majka. The program will likely expand due to the unfortunate opioid problem facing so much of the population today.

Any student from any county is eligible to attend the school through a recommendation, interview, and intake process. It is suggested that a student’s family member or advocate contact the school and make arrangements for the intake process.

Already, the administrators are looking to expand from its one classroom. With the opioid epidemic affecting many teens and adults throughout the Garden State and the United States, there will be no shortage of students needing help and assistance.

“We are working with Brookdale on another building here that needs to be renovated, where we can house many more students,” Majka said.

The Right Your Life officials first approached the Matawan-Aberdeen Regional School District during the summer of 2015 about starting a school such as the KEYS Academy, according to Loures, “Right Your Life” was created in 2010.

“In 2010, we started doing 5K runs as a non-profit to support [and] offset the costs of recovery for youth. What we did is that we used to give out money to other organizations working with youth,” Loures explained about her organization. “In 2013, we officially became Right Your Life. We have a recovery center in Matawan and that opened in late 2016.”

“Our hope is that schools across the state begin to see the value in helping our youth heal. We want to create an environment that helps student to see that they can have a future that is different than their past,” Loures said.

One parent, whose son has been challenged with addiction issues said, “My biggest fear was how can he go back to school? What will happen in two months? What will happen in three weeks? Because I knew that the same environment that caused this is probably going to cause a relapse. Programs like this are so important to save lives, so that is what we are doing here. We are saving lives and we are giving our kids a future and hope.”

For more information about the KEYS Academy, visit www.rightyourlife.org/keys-academy–recovery-high-school.html.