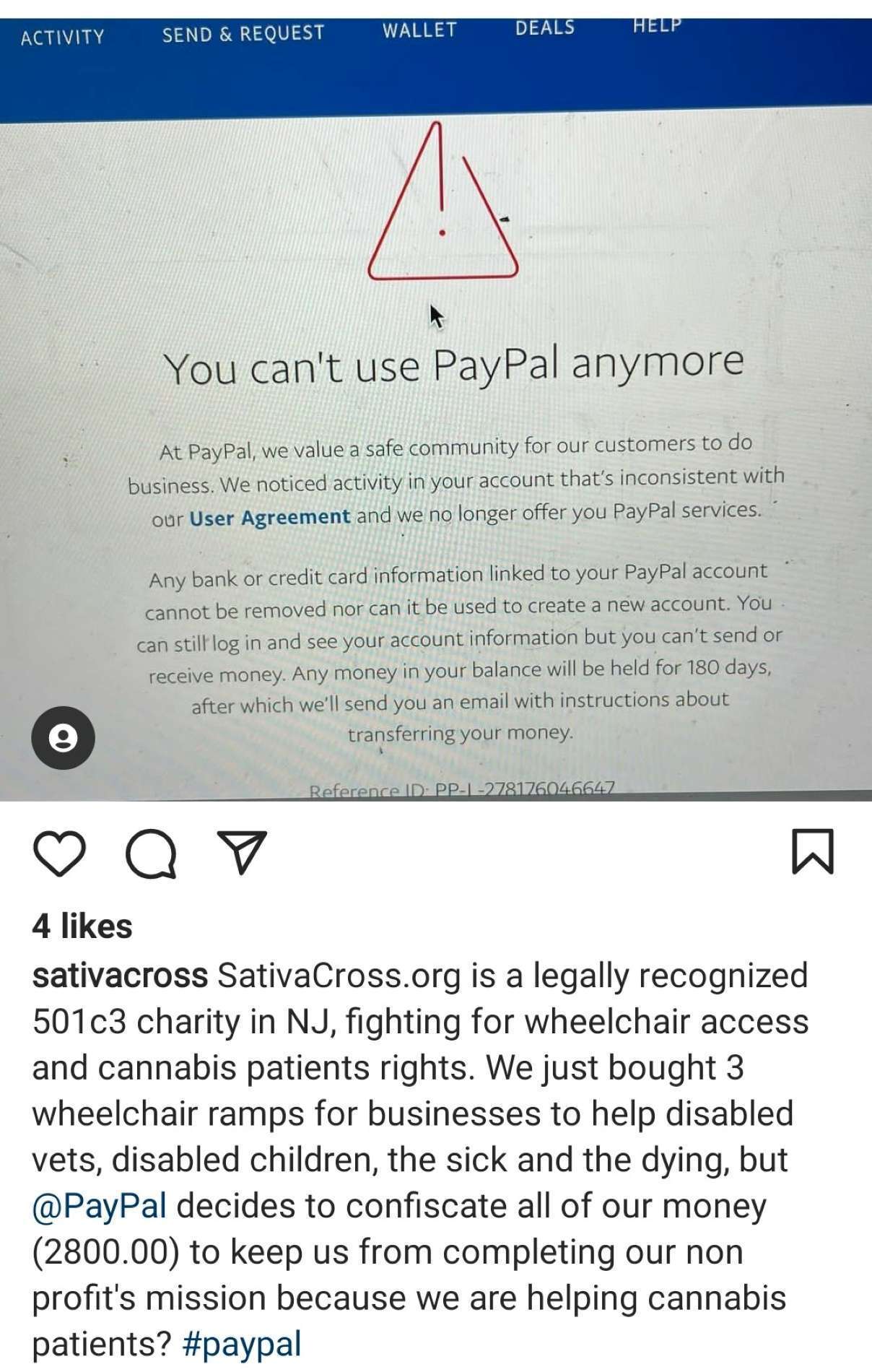 The cannabis activist group Sativa Cross had their PayPal account frozen likely due to the stigma and issues remaining with federal prohibition despite state legalization.

Sativa Cross is a 501(C)3 non-profit that advocates for medical cannabis patients and adult-use legalization. They have been especially vocal on the need for cannabis homegrow legalization for years.

Sativa Cross Deputy Treasurer Adam Umansky explained that Lead Organizer Edward “Lefty” Grimes received an email from PayPal saying their account would be restricted and they cannot access it. He noted they plan to hold the money for six months.

“They were unhelpful in the process,” he added.

“I never thought bankers were compassionate, to begin with, but to ruin a charity’s finances and keep them from fulfilling their mission statement to help disabled people is unconscionable,” Lefty said.

The most jarring part was that they wouldn’t say why there banned or the conditions under which they would keep money or release it.

On Sativa Cross’ most recent podcast, they called PayPal to discuss the issue.

“There’s they nothing could do,” Umansky recounted a company representative telling them.

He said they also spoke to his supervisor, who said the same thing. PayPal said they need to hold money for six months to make a decision. However, Sativa Cross seems to be permanently banned, effective immediately.

“If a bank doesn’t want to do business with you, they say it,” Umansky recounted Lefty telling the representative.

“Yeah, well, PayPal isn’t a bank,” was their response.

“They said we were violating our terms but not telling,” Umansky said. Which was really strange.”

“I don’t know how to answer the question for you,” one said when they sought to point out the contradictions in their policies.

“They wouldn’t even acknowledge it,” Umansky noted.

He said PayPal might want to steal their money.

“They’re just a big corporation, and that’s what corporations can get away with in this country,” Umansky added.

Umansky noted PayPal seemed indifferent they are a non-profit and not a business.

“They just took our money, they’re not giving any reasons, and they’re being smug about it,” he said.

Umansky lamented that the problem with PayPal came when Sativa Cross has grown its following in the wake of legalization significantly.

“Now we’re hobbled,” he said. “PayPal is literally stealing money we were gonna use to buy ramps and hold events for patients.”

Umansky said PayPal is likely too large a company to sue successfully since they have the resources to drag out a case.

He said they will keep fighting to get their money back.

“Sativa Cross is an important community organization, and we have support. So, we’ll bring ourselves back up,” Umansky said.

According to the PayPal website, “You may not use the PayPal service for activities that: Violate any law, statute, ordinance, or regulation. Relate to transactions involving (a) narcotics, steroids, certain controlled substances or other products that present a risk to consumer safety, (b) drug paraphernalia, (c) cigarettes, (d) items that encourage, promote, facilitate or instruct others to engage in illegal activity.”

While cannabis has been legalized in some states, at the federal level, it remains categorized as a Schedule I narcotic.

Many cannabis companies, both plant-touching and ancillary, have reported issues with banks and other companies due to federal prohibition despite state legalization.

The Secure and Fair Enforcement Act or the SAFE Act introduced into Congress would end such issues. While it passed the U.S. House of Representatives in 2019, the then Republican-controlled Senate failed to pass it.  It is currently delayed since many prefer the Cannabis Administration and Opportunity Act which would simply remove cannabis from Controlled Substances. In the hyper-partisan Congress controlled by Democrats by a thin margin, neither bill has made much progress. Senate Majority Chuck Schumer (D-NY), who is spearheading the Cannabis Administration and Opportunity Act, wanted people to submit public comments on the bill during the summer.

The situation is similar to what happened when GoDaddy abruptly stopped providing customer support to HeadyNJ.com, citing their anti-cannabis policy.