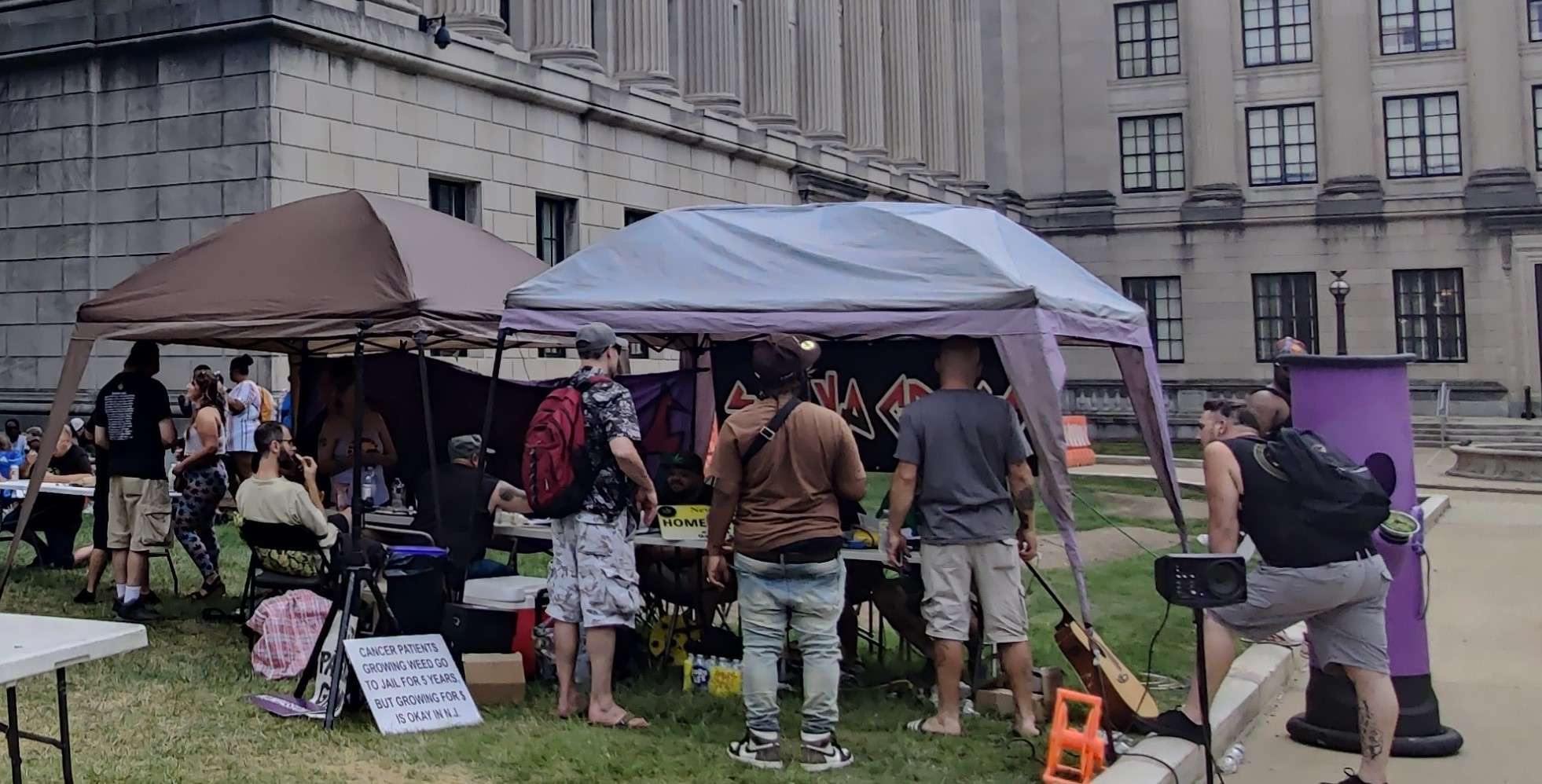 Sativa Cross spearheaded the effort to raise awareness about the effectiveness of medical cannabis for patients. They feel there is a need to increase safe access for medical purposes and combat discrimination and stigma surrounding medical cannabis. They also wanted to celebrate the miraculous healings and success stories of medical cannabis patients around the country.

“The overwhelming majority of drugs merely treat the symptoms of a disease while leaving its cause unexamined and untreated. By contrast, medical cannabis can treat both the symptoms and the underlying causes of disease,” said Sativa Cross founder Edward “Lefty” Grimes.

The event centered at the New Jersey Statehouse Annex in Trenton and featured a cannabis cup, a dab bar, free cannabis, and an 8-foot guitar-playing bong.

“We want this day to be celebrated every year by holding rallies and gatherings to recognize individuals who are helping patients and to demand the government end prohibitions that prevent people from being able to choose an effective natural alternative to harsh pharmaceuticals,” Grimes explained. “We also want this to be a day where medical cannabis is donated to patients who cannot afford what they need to treat their ailments.”

Thus, a great deal of cannabis flower, blunts, joints, and pre-rolls were indeed freely passed around to the assembled supporters of activists, patients, connoisseurs, and aficionados at the Statehouse.

Paul Stanford and HoneyB Thomas organized the rally at the Oregon Statehouse with an RV for patients to medicate safely.

“Medical patients demand greater patient access, lower state fees, and less pointless time-consuming red tape for the sick and dying and their caregivers. Cannabis is a safe and effective medicine for an incredibly diverse assortment of conditions,” said Stanford. “Medical marijuana patients have been neglected in the Green Rush for multinational corporations to dominate the marketplace.”

Chris Velasquez of Sativa Cross and the Dover Cannabis Company noted they wanted to highlight the lack of strong cannabis FECO oil in the New Jersey medical cannabis market. This subsequently adversely affects the most sickly patients who need significant doses of cannabis to heal effectively.

The alternative he said, was to buy an expensive cannabis ounce for around $500 to make the oil themselves in a Do-It-Yourself scientific fashion.

Jason Cordero of Sativa Cross managed the cannabis cup, handed out weed, spoke about Crohn’s disease, and handed out RSO and infused cookies.

Only local New Jersey legacy brands that have been tabling at cannabis markets submitted strains. They were allowed to submit up to three.

The legacy brand Urban Hippie won it with No. 11 Black Cherry Gelato, No. 12 Bottom Dollar Cannabis was 2nd with Gorilla Glue, and tied for third were Lemon Cherry Gelato by Budwiser, Mac One, and Purple Haze by Urban Hippie.

After the joints were passed around to the judges, those gathered in tranquil leisurely fashion in lawnchairs were offered it along with flower in numbered cups from the cannabis used to roll the joint. Many sat around and generously passed joints, blunts, drinks, and edibles on a leisurely and sunny July Sunday.

Sativa Cross aims to have even more states participate next year and plans to continue growing the event.

After the Cannabis Cup was concluded, activist Mike V donned his Bongholeo cannabis costume and performed.

Like a Charlie Brown Special, one could wander seeking the meaning of 7/10 OIL Day and not find it.

While the traditional cannabis holiday 4/20 is well-documented (like in my self-published book Cannabis 101) to have originated within the Grateful Deadhead community and popularized through the cannabis magazine High Times over several years. By contrast, 7/10 OIL Day is a newer holiday less than 20 years old.

7/10 OIL Day is a celebration of Cannabis Oil and Dab concentrates (like hash made in a lab) versus the traditional flower form. On a calculator, 710 upside down looks like OIL. The holiday developed legal adult-use state cannabis markets in the West, where companies have the space to develop innovative products that can be stronger than flower.