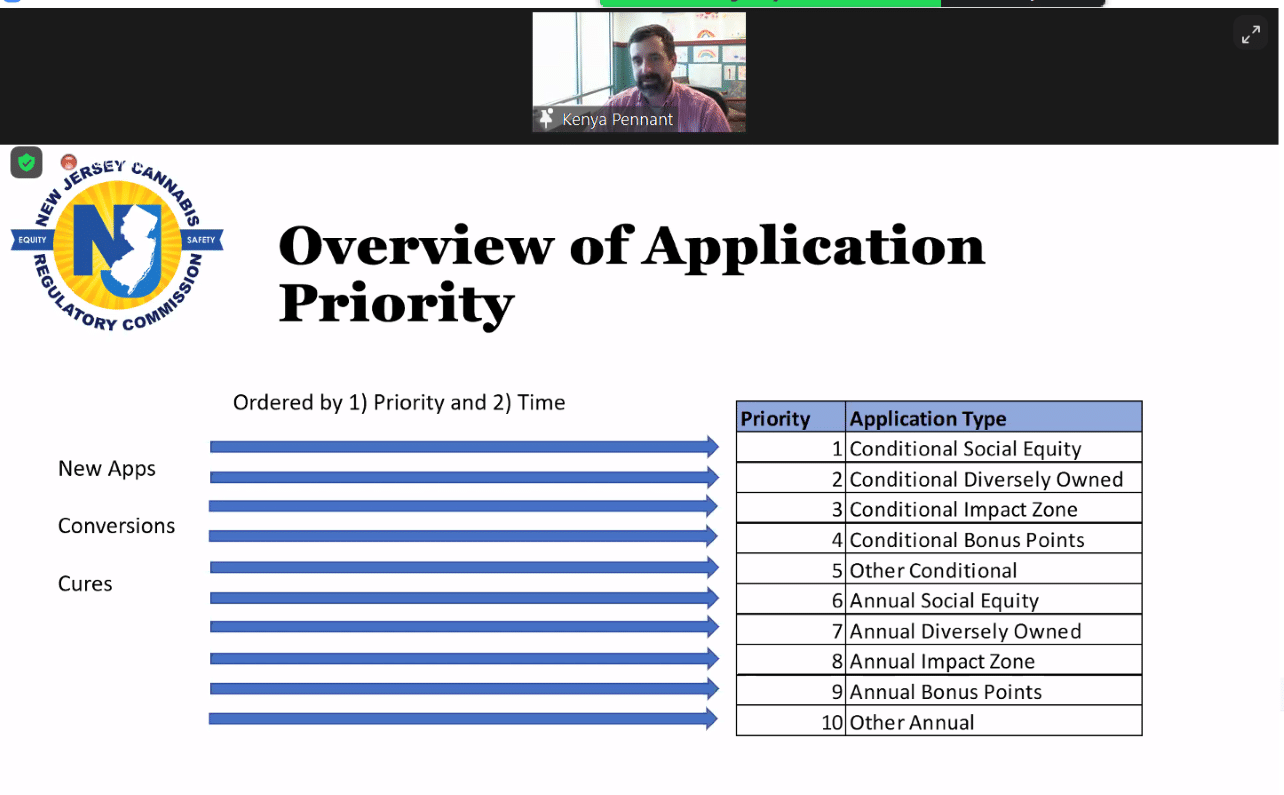 According to Brown, one-third of the NJCRC staff is reviewing applications.

He noted the NJCRC had reviewed all the conditional applications at least once. Applicants will likely get questions about fingerprinting and financial issues, which must be responded to quickly, or the process is delayed.

“We tend to see people drag their feet for whatever reason,” Brown said.

Now that conditional review license application reviews have been finished, “this whole process is going to go a whole lot quicker,” he said.

Brown said they are nearly at their goal of reviewing every cannabis license application within 90 days of receiving it.

Reviewing conversion applications, unfortunately, he said, will take longer than 90 days after they are submitted to review. He said it could take six months to review the annual license. “Cured” applications with a problem are put at the bottom of the electronic pile among those with the same prioritization designation.

Conversions and annuals take longer because of the criminal history background check and financial probity. Brown said conversions get reviewed before annual application in accordance with their priority established in the notice of application acceptance. Cures resubmitted are sorted according to priority and time. Thus annuals are reviewed after conversions.

“We know folks are getting frustrated and antsy,” he said about the process.

“If you supplied a separate email… check that email. Make sure the CRC emails are not ending up in your spam. Let’s help ourselves,” NJCBA President Ed DeVeaux said. “With respect to the cures… I’m back in the queue but based on prioritization?”

“That’s correct,” Brown said. “I’ve been reviewing applications myself. I put together some cure letters. Two weeks later, I got those applications back to review again.”

“It’s so important to get through this initial rush. We’ll be able to move things as they come in,” he added.

Brown noted about 1200 applications had been received thus far by the NJCRC. He explained annual application winners wouldn’t be ready to announce in September. The NJCRC does not have an August meeting scheduled. They are in the process of reviewing them.

They are the businesses most likely to succeed since they have the money to secure property along with local approval and then pay to hold the property while they wait months to hear back from the bureaucracy.

It is an unfortunate truth of business that most new businesses fail.

DeVeaux noted many have been saying, “I haven’t heard anything yet. When will I hear something? Take a moment to address that.”

“We’re talking about deliberative government processes. You will hear something,” Brown said.

“There’s a lot of room to grow,” Brown said about the current limited adult-use cannabis market. “We know there are limited locations.”

He admitted the average price was too high due to a limited supply.

Brown noted the difficulty holding property and getting town approval.

Unfortunately, the NJCRC has made little progress addressing access to Capital, local guidance, or real estate. They said they are working with the NJ Economic Development Agency (NJEDA), but no program has opened yet.

Some cannabis professionals believe far less than half of the 300 adult-use cannabis conditional license winners will be able to convert to an annual license and open.

Brown noted there are about 130,000 patients in the program.

“Making sure they were prioritized was critical,” he said.

He said he wanted all applications in the system fully reviewed before the Delivery, Warehouse, and Distribution license portal opens. He did not give a date for a future portal opening.