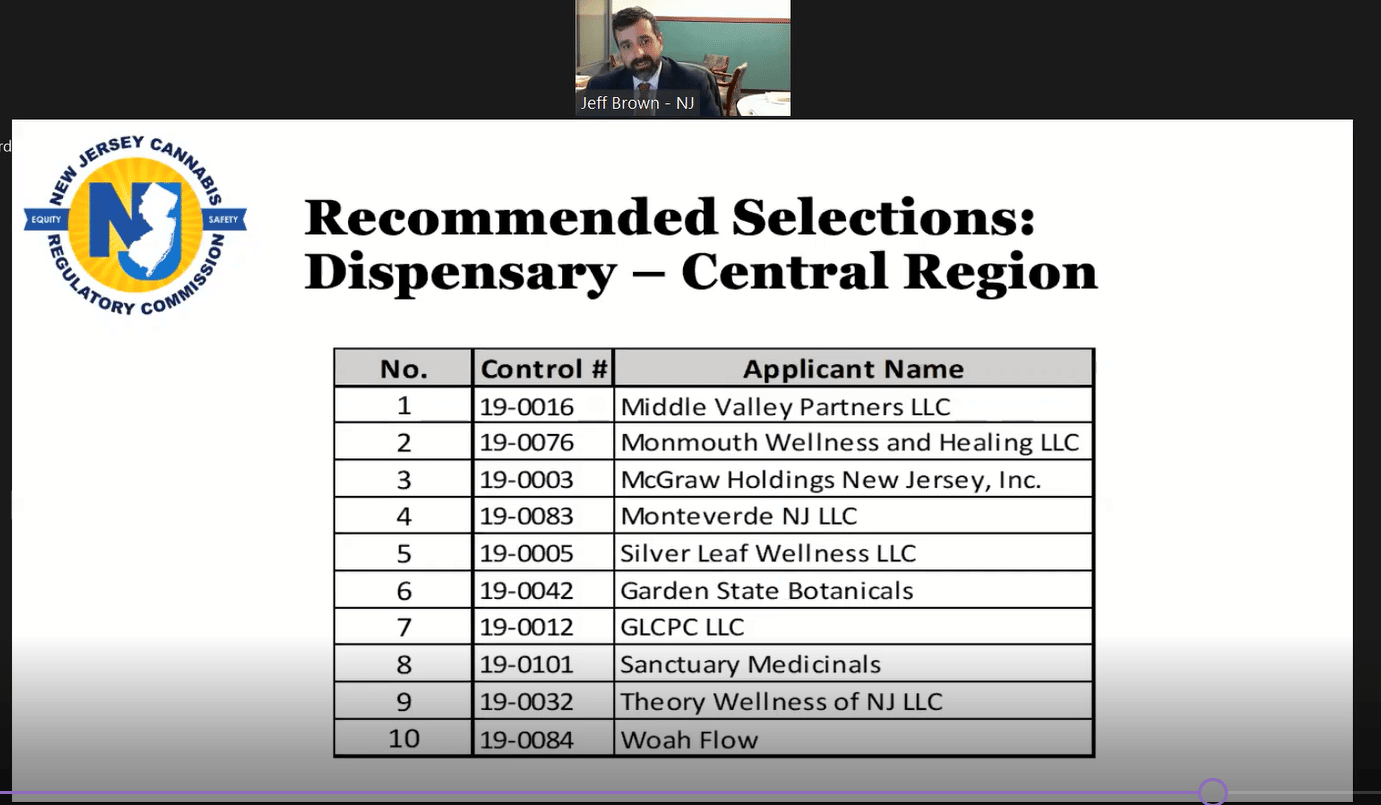 They thus ended a process that started 29 months ago.

“The price of cannabis is still high, and the patients per dispensary is still high,” Executive Director Jeff Brown said. “We have an opportunity to get this program in line with what we need to see and what patients really need as far as access points.”

Therefore while 15 dispensary licenses were supposed to be awarded, Brown said they would award 30 instead.

The North Jersey winners are:

The South Jersey winners are:

Brown explained that of the three regions, Central Jersey has the greatest need for more dispensaries.

“Unlike in cultivation, location does matter,” he said.

Brown announced there are now 122,000 patients in the New Jersey cannabis medical program. Thus New Jersey should have 61 dispensaries, which correlates with a 2018 report he cited.

“One of the biggest issues we hear from patients… is that they often have to travel long distances to access their medication,” he said.

The medical cannabis dispensary license winners need to confirm site control and approval from the town’s government within 20 days. They must also confirm whether they are Women or Minority Owned.

Applicants were scored on a range of metrics, including their ability to meet overall health standards and history with regulatory compliance. Brown described a thorough reviewing process to confirm scores and ensure there were no errors. A selection committee of state employees who they said had no conflicting ties graded the applicants.

Brown noted the awards are provisional and do not guarantee the issuance of a permit.

He has consistently not voted with the rest of the CRC on key votes advancing the Commission’s work. Barker has given no explanation why.

Brown noted that by November 12th, the 2019 winners announced in October had to submit proof of site control and local approval along with certification they were Woman or Minority Owned.

Winning the license is conditional upon submission of key information and the approval of the CRC. Applicants still need to comply with requirements like providing criminal history background checks and verification of applicant information after being awarded a license conditionally.

CRC Chair Diana Houenou reviewed her yearly report and noted the Commission’s milestones. She said they accomplished a tremendous amount setting up the adult-use cannabis market and expanding the medical cannabis program.

Houenou noted the CRC was launched on April 12th. Soon after, they adopted cannabis lab standards. The interim adult-use market regulations were then released on August 19th.

“It was a big moment for the Commission. We got a 160-page set of regulations just four months after being set up,” she said.

“We’ve done a tremendous amount in getting our recreation industry and establishing a foundation for our recreational industry,” Houenou said.

“With the notice of application acceptance and guidance for expanded ATCs already out and published, we eagerly await and see what applications and certifications come to the Commission,” she said. “We at the CRC are very excited to these what comes through those doors.”

“We’re very excited to see um the Garden State begin to plant its roots and take shape here as we get our cannabis industry up and running,” Houenou added.

They expect to issue the licenses and adult-use sales to begin next year at some of the existing medical marijuana dispensaries.

“Our Commission is eyeballs deep in partnership agencies to serve our New Jersey and make sure New Jersey’s cannabis industry is one that embodies our values,” Houenou said.

She explained the CRC is collaborating with other New Jersey state agencies to provide technical assistance to applicants in the future to provide access to capital and build a robust cannabis workforce.

“We have been listening,” Houenou said, noting many individuals have brought up these issues at CRC meetings.

Houenou said they expect staff recommendations on the six 2018 applicants who won a lawsuit over the scoring process over the next few weeks by the end of the year.

Thus, a resolution on the recommendation was tabled.

Next year, Houenou said the CRC must adopt regulations that detail delivery, wholesale, and distribution licenses.

They would also like to update the medical cannabis regulations to mirror the adult-use regulations.

Some patient advocates are unhappy that certain provisions of the Jake Honig Act of 2019 that expanded the medical cannabis program like home delivery have yet to begin.

On the meeting schedule for 2022, Barker objected to the meetings, which were largely scheduled for 1 pm.

“I believe that evening times should be established, and interested parties can’t make meetings at 1 pm, nay,” he said.