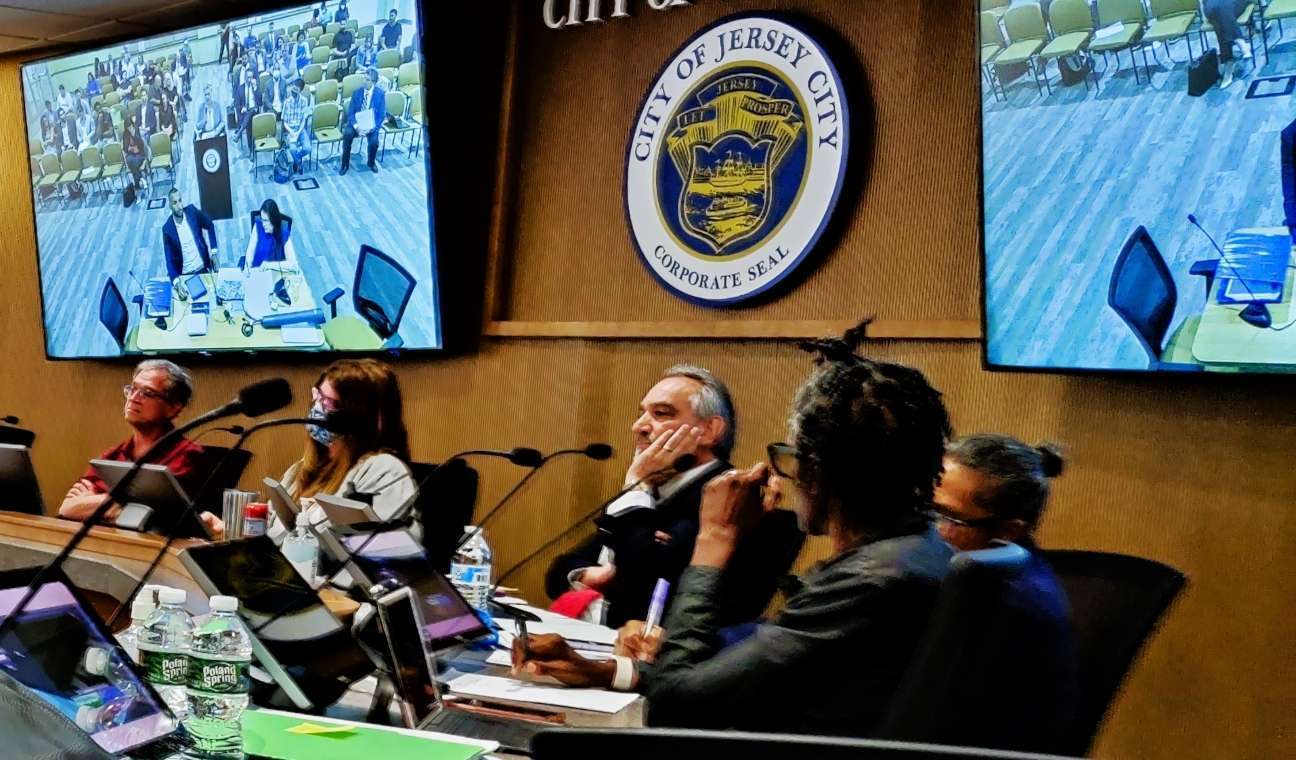 Hudson County Commissioner Bill O’Dea spoke in favor of the Jersey Leaf dispensary at 554 West Side Ave. He noted the principal owners are the Margetis family, who have owned businesses for 30 years in the city. O’Dea also noted they are involved with his non-profit the South Hudson Civic Association.

“They’re social justice,” he said regarding their background.

O’Dea said they were located on West Side Avenue, more than 1,000 ft from a school.

“They’re micro-retail, which I think is the type of businesses we want,” he added.

“We are committed to hiring only Jersey City residents,” he said. “The diner is three blocks away from the store.”

Jersey Leaf’s noted attorney Fruqan Mouzon explained he worked for the NJ Senate Democratic Majority Office when now-NJ Senate President Nick Scutari (D-Union) first sought to sponsor adult-use cannabis legalization. He said as a staffer, it was part of his job to ensure that not only rich, white men from out of state would benefit.

“I am honored to represent what I think was the ideal of this,” Mouzon said. “What we have here is the unicorn. They’re not white, they’re not rich, they’re from Jersey City.”

Jersey Leaf co-owner William Pena noted he was a felon who owns a trucking company.

“I definitely want to give people opportunity who got in trouble like myself,” he said. “I’m just an open book to help the next person get ahead in life.”

“What do you do with the South Hudson Civic Association?”  Jersey City CCB Chair Brittney Bunney asked.

Margetis said with the association that he has helped minorities and felons get jobs and been involved in activities with seniors and kids. He noted he coaches youth sports in the city as well.

Margetis said he is a member of the West Side Ave Special Improvement District (SID) and said there had been no opposition.

“You check all the boxes,” Bunney said. Thus they are approved.

Decades Dispensary, which will be based at 404 Central Ave in the Heights, was also approved. Neel Patel and Bakula Patel would be the owners.

“Jersey City has been my second home since I immigrated to the United States in 1983,” Co-owner Bakula said. She noted while she does reside in Morris Plains, she grew up in Jersey City.

Bakula is a pediatric physical therapist in Jersey City and owns a daycare, while her partner Neel lives in Oxford, CT. He explained they have been involved with dispensaries in Massachusetts, Ohio, and Connecticut. Neel said they’re a family run-organization and recounted their operations in Massachusetts.

The CCB approved them as well

Medusa Delayed by Cannabis Control Board Due to Catholic Opposition

The Jersey City Cannabis Control Board delayed approving the locally-owned Medusa dispensary lounge near McGinley Square at 759 Bergen Ave due to opposition from local Catholic institutions.

Officials from St. Peter’s University, Hudson Catholic High School, and St. Aedan’s Church testified against Medusa. A St. Peter’s representative said they have to be like parents to their students.

“I’m not against your business but I have a lot of respect for the people who spoke tonight,” Bunney said.

She lamented they did not try to work with the Catholic institutions that were in opposition.

“Cannabis is here. It is going to be in Jersey City,” Bunney said. “I don’t have an issue with your application. You have not spoken to St. Peter’s or Hudson Catholic. We just can’t disregard these institutions.”

“I hope that both sides will sit and have a conversation and try to find a way to move forward because I do think cannabis is in this city, and that’s the reality,” Bunney said.

“There are two bars in the same radius,” Medusa owner Haytham Elgawly noted since the opposition was so concerned with underage consumption.

UFCW labor union Organizer Hugh Giordano said Medusa has signed agreements saying the building will be constructed using union labor and they will allow their dispensary workers to organize a union without interference.

“I am in favor of the application. I’ve known Haytham for over 25 years. I have heard nothing but an excellent plan,” Angel Matos said. “You may not know him, but your students know him. This is a guy from Jersey City doing it. Let’s approve the application.”

Medusa’s attorney Rosemarie Moyeno Matos noted there was no danger of the local schools losing federal money due to legalization.

“There is a plan to reach out to local neighbors. There’s not much to be done until we get a license,” she said. “We can control who walks into that establishment, 21 and older with proper identification.”

Local Modiv dispensary co-owner Chelsea Duffy explained she has been living in Jersey City since 2016 and has become involved in different civic organizations, including the Jersey City Women’s Advisory Board.

“Everyone at this table is a Jersey City resident,” Local Modiv’s attorney Joseph Shapiro said.

They would be based at 155 Newark Ave in downtown Jersey City though they want to help every ward.

Co-owner Matthew Similuca said he has been involved in the city as an IT business entrepreneur. He noted their site has been an eyesore for some time.

“I think it has been about 10 years,” Similuca said.

“There’s a lot of sweetheart work going on. We’re unable to promise anything we can’t see through,” Duffy said when pressed about giving back to the community.

A representative from the cannabis company Oceanfront Holdings said they have been approved for licenses from the State and were based at 145 Newark Ave, raising a boundary issue.

“It boils down to council. There’s going to be two resolutions before that body, and they will understand they will that,” CCB attorney Ron Mondello said regarding the dispute.

“It is not our purview,” Bunney said.

Bunney admitted they were unclear regarding the issues with the SID.

“I want something in writing from the SID,” Flannagan said.

Thus, their application was postponed.

How To Make CBD Oil from Flower