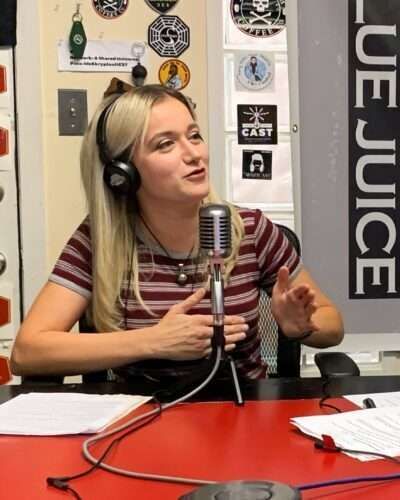 “I love podcasting. I’m having a lot of fun. I have so many conversations,” Misu said. She said the genesis of it came that after being on many panels where the conversation is very formal, talking to the same people afterward is far warmer, and sometimes just as insightful.

She is of course a great fan of podcasts herself.

Misu said there is an opportunity for a new sort of podcast since some cannabis podcasts get technical or plug their business for an hour. So, she wanted to make hers entertaining.

Since there are so many podcasters out there today, it’s probably difficult to get a new podcast to reach larger audiences and keep them interested, besides having to get it up and running in the first place. Those who want to get into the world of such talk shows or narrative podcasts can probably approach organizations like Lower Street (you can find more information here) so that they can get the right people interested in it aside from creating content that nails it.

So far, guests have included cannabis celebrities such as Makeda Marley (daughter of the legendary Bob Marley) and Super Bowl champ and CBD advocate Cullen Jenkins. She has also spoken with old school cannabis legends such as grow expert Nico Escondido, and veteran advocate and consultant Leo Bridgewater. New Jersey’s leading cannabis figures will be featured including Jesse Gill, founder of Mommy in upcoming episodes. Future episode guests will also include athletes and other celebrities.

Misu said her ultimate guest would be Joe Rogan. While she joked that would be a bit of a reach, Tara Misu does have a good network to draw to secure impressive guests.

Originally the show was recording in Eatontown, NJ at the podcast studio A Shared Universe run by Ming Chen of AMC’s Comic Book Men. However, due to COVID-19, the shows are now being recorded on Zoom. There’s a silver lining to this however since it allows Misu to interview people across the country.

“We’re doing what we can,” Misu said.

She said that one of the silver linings of COVID is the number of hours doubled in the day since there are no networking events, meetings, nor driving, so it has been easier to make time for it.

“I’m very good at talking, there hasn’t been much learning,” she said. Misu explained she had hosted live shows before, so hosting part came naturally. The tech part was a bit harder.

The show has a varied tone depending on the guest and subject since Misu said she doesn’t want it to be all silliness nor all seriousness. “Trailblazin’ with Tara Misu” aims to put the fun back in cannabis while sharing some insider wisdom.

Themes discussed include legalization, cannabis entrepreneurship (including marketing restrictions, social media, getting funding, licensing, intellectual property, banking), aspects of the cannabis supply chain (growing, processing and dispensing), social justice, opportunities for women and minorities, the drug war, medical use, and CBD, tales from cannabis past and hopes for cannabis future.

Tara Misu aims to have people from all different backgrounds on the show to showcase the diversity of the industry.

Misu is the owner and founder of edibles company Blazin’ Bakery whose products have been in more than 1000 shops. She is also an activist having penned historical medical marijuana legislation in New Jersey, a professor teaching cannabis, and a national conference speaker.

“Trailblazin’ with Tara Misu” is intended for adults 21 and over who are of legal age to consume cannabis.